As the curtain closes on the fantasy epic, these bakers sing a song of sponge and fondant

The night is dark and full of…cake? I, Andrea Allen, First of Her Name, Mother of Kittens, Eater of Cheese, and Protector of the Nine Coffee Shops That Circle Her Home, hereby proclaim that all cake should be Game of Thrones themed. Those who side with me, continue forth in this tale, and remember: even though winter has come, we can still find snippets of good. 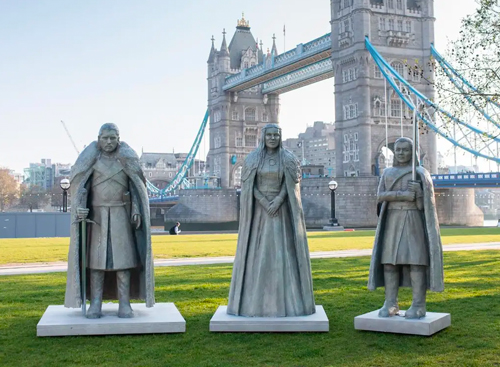 When Game of Thrones returned to HBO April 14, fans went appropriately crazy for the final season. I won’t spoil anything for anyone, for fear that my head may end up on a spike. But rest assured, fair audience, there were many moments worthy of memorialization via cake. One such artist, commissioned by Stork baking spread, baked three statue-sized cakes depicting Jon Snow, Sansa Stark, and Arya Stark—all looking appropriately regal.

Michelle Wibowo, INSIDER reported, worked tirelessly on these sculptures—which were on display at London’s Tower Bridge. Each took about 300 hours to make; the largest statue, Jon Snow, weighs almost 150 pounds. He even has a cake-version of Longclaw! In total, the statues weigh 400 pounds. 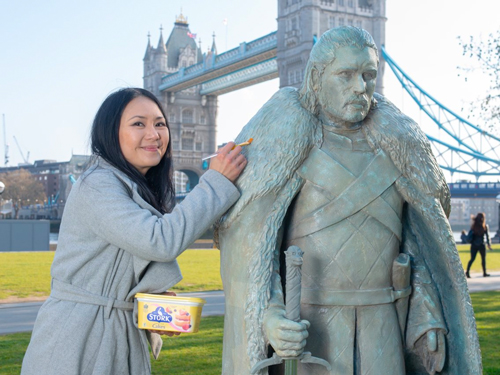 Another glorious creation stood at The Home Bakery in Rochester Hills, Michigan. Featuring one of Daenerys Targaryen’s dragons and The Night King himself, the display was made with over 100 pounds of fondant and 160 quarts of buttercream.

If I had a sigil, it would undoubtedly be of a slice of cake, for a girl has no name unless that name aligns itself with dessert.

For the latest in how Game of Thrones is filtering into the specialty food space, keep reading Deli Market News.

King's Hawaiian Joins Forces With No Kid Hungry This Summer to Help...