Last year Organic Valley introduced its organic flavored half & half—a delicious, wholesome, real-dairy alternative to oil-based, artificial coffee creamers. Now one of the nation’s largest farmer-owned organic cooperatives has announced a new flavor in the line: Organic Valley Sweet Cream Half & Half. The new flavor will now complement its plain, hazelnut, and French vanilla flavors in dairy cases from coast to coast.

The line has grown to be of the leading organic flavored half & half brands in the U.S., just one year after introduction. Organic Valley’s newest addition will be one of the first organic sweet cream half & half coffee creamers available in the United States. Coffee drinkers looking to cut down on sugar will also be pleased that this half & half has 30 percent less sugar than leading competitors’ products. 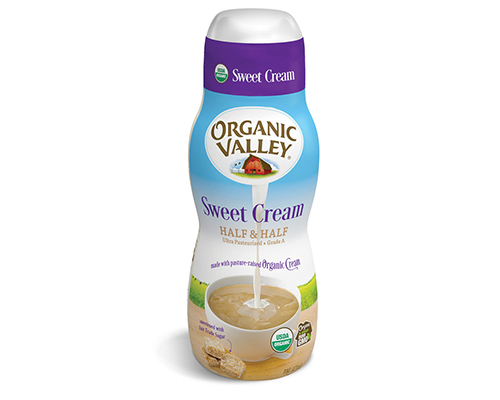 Organic Valley Sweet Cream Half & Half contains only four ingredients: real cream and milk, fair trade unrefined cane sugar, and vanilla. Like all Organic Valley dairy products, the Sweet Cream Half & Half is produced from the milk of cows that are raised on the lush, green pastures of Organic Valley family farms without the use of GMOs, antibiotics, synthetic hormones, or toxic pesticides. It is also completely free of artificial colors and flavors, preservatives, high fructose corn syrup, and hydrogenated oils.

Organic Valley Sweet Cream Half & Half will be available in August 2017 at Whole Foods Markets nationwide and some additional retailers.

We’re a cooperative of family farmers on a mission to produce the world’s best organic foods for you and your family.