Suzanne Fanning discusses a record-setting strategy, an exceptional event, and the future of Wisconsin Cheese

There are many things that have wowed me, but some much more than others. When I found out that the Dairy Farmers of Wisconsin were creating the world’s largest cheese board, my eyes widened and my stomach growled with eager anticipation of the big day. Debuting at Concerts on the Square, where 40,000 people enjoy performances free of charge on August 1st, the organization is welcoming attendees to walk alongside in amazement of its 200-square-foot cheeseboard.

“What we really want to do is showcase to the world the amazing innovation and breadth of award-winning artisan cheeses from Wisconsin,” Suzanne Fanning, Vice President of Marketing Communications, tells me. “When people think of Wisconsin, they think of big blocks of cheddar. In reality, we win more awards than any other state or country. We produce about 45 percent of the specialty cheese in the country. We have amazing cheeses here, and we want the world to know that. By showcasing our cheeses, we are allowing the public to engage in what we produce—knowing all the pictures and all the conversations that will be had is a great way to shed light on what is going on in Wisconsin cheese.” 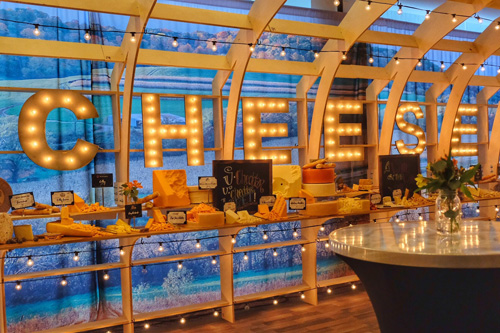 At the event, Dairy Farmers of Wisconsin will recreate the barn that it used to house its cheeseboard at South x Southwest in Austin, Texas. Now, the size of cheese board sitting inside the barn will increase, reaching 200 square feet. At its first launch in Austin, the cheese board brought about a lot of media attention, Suzanne explains, and consumers were going wild for it. After many questions on whether it was verified to be the largest cheeseboard, the organization took matters into their own hands, bringing the Guinness team on deck to make it official. A judge will now be attending the event to assess the size and weight and make the big announcement.

“It makes sense that if we are officially making the World’s Largest Cheese Board, we should do it in Wisconsin. We are creating an exact-to-scale replica of a commercially available cheeseboard. This means that it will be 200 square feet and have 3500 pounds of Wisconsin cheese!” Suzanne declares. 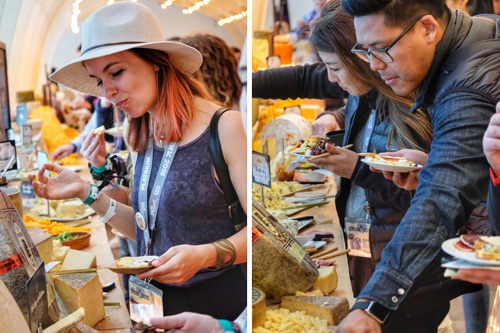 At this point in our chat, I have to lift my jaw off the floor—almost two tons of cheese. Wow! On top of that, every single cheesemaker in Wisconsin was invited to join in the fun so that the entire state felt involved in the process. This big moment couldn’t be done without those who bring the cheese to the table—quite literally.

“The cheesemakers are so awesome, and for this event, I am getting calls from people saying, ‘I’ve heard about this. How do I get involved? How can I donate? When do I ship? I want to be included.’ They want to be part of the event and history!” she tells me with an excited laugh.

This event not only draws attention to the cheeses hailing from America’s Dairyland, but also helps those in need. Suzanne informs me that, while technically free to the public, donations will be accepted from those walking through the exhibit, which will go to the Great American Milk Drive in Wisconsin to buy milk for kids in need. 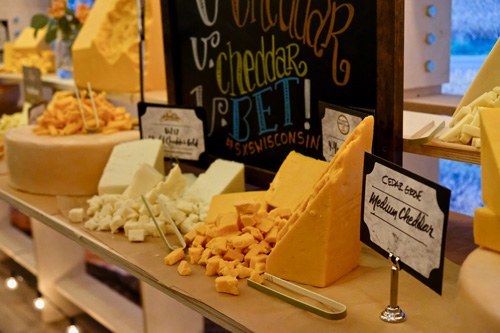 Those attending will be shocked by the beautiful display of cheeses as they wrap around the barn, but they will leave feeling happy and full with a plate of Wisconsin cheese to take to their blankets in the park. What better way to make a mark on someone’s memory than giving them an experience they will never forget—cheese!

“The way marketing today works, in general, we can talk about ourselves all we want. We have talking points all over the place. What really makes a difference is when consumers get engaged and consumers are talking about you and they do the marketing for you. That’s a big shift we are making in our organization in this very, very old industry in Wisconsin. We’re going to give consumers reasons to talk about us. We’re going to give them samples and incredible photo opportunities. We’re going to find out fans out there and interact with them in new and fun ways. Instead of us taking pictures and sending out a press release saying, ‘Hey, our cheese is amazing,’ we’re going to have all our consumers amazed over this cheese board taking pictures to post on their social media platforms. There is much more coming with that. We’re just now scratching the surface,” she tells me. 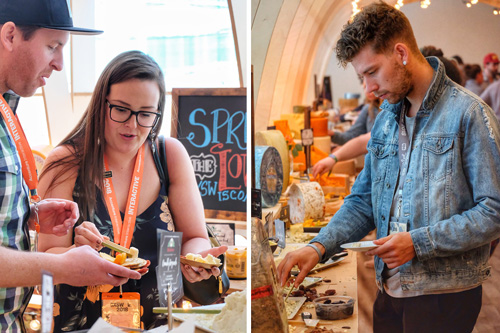 With judging set to take place by 3:30 p.m. that day, the announcement will be ready to broadcast during the 5 p.m. news cycle.

“Everybody loves cheese, and we’re really grateful for that,” Suzanne says at the close of our chat.

Yes, I’m thankful for that, too!