Reporting its strongest volume performance to date, what's next for the company?

Combatting a years-long decline, Dean Foods announced third quarter results this week that saw the company strengthening its volume performance and attempting to right the ship despite year-over-year declines.

Chief Executive Officer Gregg Tanner said, "I am extremely pleased with our third quarter results, which reflect the strongest volume performance we've seen in years, a disciplined go-to-market strategy and continued focus on reducing costs. Our entire organization is focused on executing our strategic plan, and you see that in our results."

In fact, a third quarter volume change of -1% year-over-year represents the strongest volume performance for the company in at least four years, with further improvements expected to follow in the fourth quarter, according to the company’s press release. Dean Foods’ net income per diluted share was $0.16 and adjusted net income per diluted share was $0.37, with fourth quarter adjusted diluted earnings expected to follow at $0.37 to $0.45 per share. 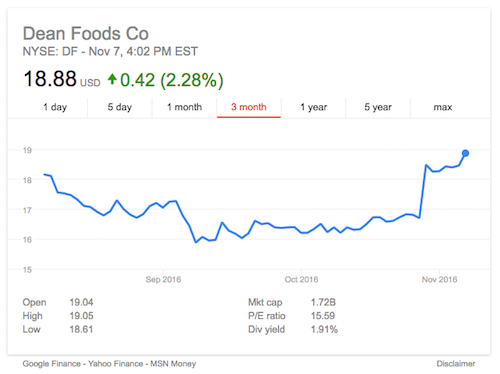 Tanner concluded the company’s announcement on a positive note: "For the fourth quarter, with improving volume performance, in addition to continued pricing and cost discipline, we expect the fourth quarter to be our eighth consecutive quarter of year-over-year adjusted operating income improvement. All told, we expect adjusted diluted earnings of between $0.37 and $0.45 per share."

For more on the state of the dairy industry, check back with us periodically at Deli Market News.

Dean Foods is an American food and beverage company that specializes in dairy products. The company maintains plants and distributors in the United States and the United Kingdom.