For those who love breakfast cereals, Starbucks' latest drink is sure to knock your socks off

Dairy-free options certainly aren’t going away any time soon. If anything, the category is expanding every day, with Starbucks continuing to hop into the ring. No stranger to the trend, Starbucks’ new drink is the stuff of vegan dreams. The Vegan Cereal Latte is blended with a cereal powder made from oat, barley, and wheat, according to a LIVEKINDLY article. The drink is served with dairy-free oat milk poured over an espresso shot—don’t worry caffeine addicts, there’s still an espresso punch in this latte—and topped with crispy bits. 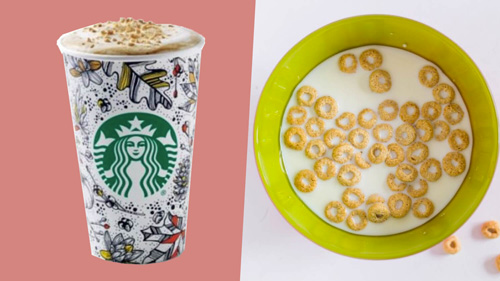 Starbucks previously noted that oat milks are the perfect addition to any breakfast, due to its mild and slightly sweet taste, as well as its fiber content. The chain offers almond, coconut, and soy as other alternatives to milk-based lattes.

Unfortunately for us folks here in the United States, we won’t be able to try this drink unless we hop on a plane to the United Kingdom. For those lucky consumers in Scotland, England, and Northern Ireland, the Cereal Latte will be available in all UK locations.

See you guys on a one-way trip to London! I never need an excuse to get over there, but now that one is open to me, I’m off!