Just in time for the most romantic day of the year, Co-Founder Adam Dick gives the deets on a new raspberry concoction

The season of love is upon us–aka chocolate season! With so many options in all shapes and sizes, making a decision on what sweet treat to gift loved ones–or enjoy for yourself–has never been harder. But, just in time for Valentine’s Day, Dick Taylor Chocolate is releasing a new, unique chocolate bar. I caught up with Adam Dick, Co-Founder of Dick Taylor Craft Chocolate, to chat about the company’s latest bar. 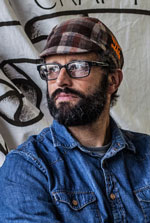 “The base of the new bar is our 73% Northerner Blend of Madagascan and Brazilian cacao dark chocolate, which we then dusted with a mix of organic freeze-dried raspberries and organic vanilla coconut palm sugar, and the combination of the two is fantastic,” Adam tells me. “It’s a sharp contrast of flavors, the tangy raspberry and the sweet vanilla, that blends really well. And the shocking neon pink of the freeze-dried powder is fun to look at. It’s a completely different looking bar, and we’re really excited about it.”

Adam also shares with me that the company went a different route with the packaging for the new bar as well. Collaborating with an artist friend, Lynn Jones of Just My Type Letter Press, the packaging is 100% letter pressed–a process that involved a hand carved linoleum block and lettering by Dick Taylor’s very own Sales and Marketing Director, Brianne Taylor. With bright reddish pink hues reminisce of the raspberry dust on the bar, the packaging is neat and clean and sure to stand out on the shelf. Perfect in a gift basket or on display by itself, the 1-ounce bars are available for wholesale in cases of twelve. 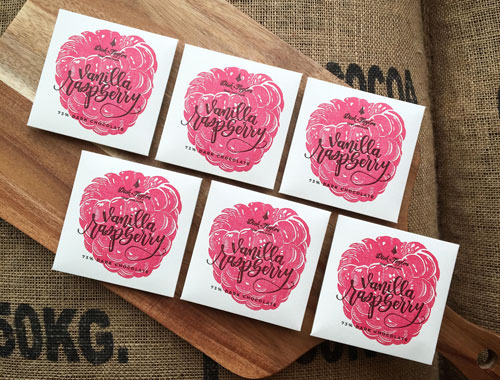 Eye-catching packaging is sure to grab consumer attention, and the fact that the chocolate inside is an award winner is the raspberry on top!

“Our 73% Northerner Blend of Madagascan and Brazilian cacao dark chocolate is a 2018 Good Food Award winner, and with this new bar we’ve added some exciting ingredients to up the stakes. This is the third Good Food Award we’ve won, and it’s one of the most exciting things to be a part of. The Good Food Awards are a robust and vibrant American craft food movement, and it is totally cool to just be included,” Adam tells me.

With 2018 off to such a hot start, I ask Adam how Dick Taylor Craft Chocolate started. In 2010, Adam jokes, he fell into chocolate making, but initially it was a hobby that had spiraled out of control. 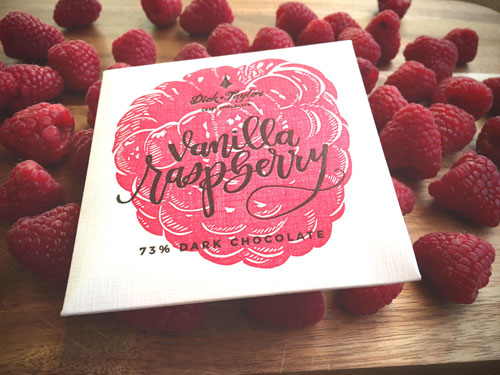 “Dustin Taylor and I had been long time friends and had worked together for twelve years in carpentry. One day, a friend of ours had passed along a video of chocolate makers, and instantly we were enthralled with the process. We had never considered where chocolate came from, so to see the transformative process was like magic. We were curious if we could make a chocolate bar, so we did–and it was terrible!” Adam laughs. “But it was different from what you can buy in grocery stores, and so through a process of trying, tweaking, and adjusting we finally produced a bar that was to our caliber.”

While chocolate has been produced on a large scale for hundreds of years, Dick Taylor Craft Chocolate provides a healthy, unique, and ethically sourced and directly traded alternative to the chocolate of today.

And, for those who boycott commercialized love, the Vanilla Raspberry Dark Chocolate bar is also available into spring and makes just as good of a gift for Mother’s Day, too!

For more on the five hundred twenty-five thousand six hundred treats, and more, in the deli, dairy, and bakery world that make this season of love so sweet, stay tuned to Deli Market News.