The old guard of convenience has long since changed. What was once deemed convenient has now become the norm, leading many of our industry’s brightest to return to the drawing board of innovation to drum up the next big thing in the on-the-go sector. For Alove, this has meant finding unique ways to bring aloe vera to mainstream consumer markets. Its latest strategy is via its new Drinkables product. I chatted with Colleen Sherfey, Senior Director of Marketing at Morinaga Nutritional Foods, Inc. to learn more about the Alove brand’s latest debut. 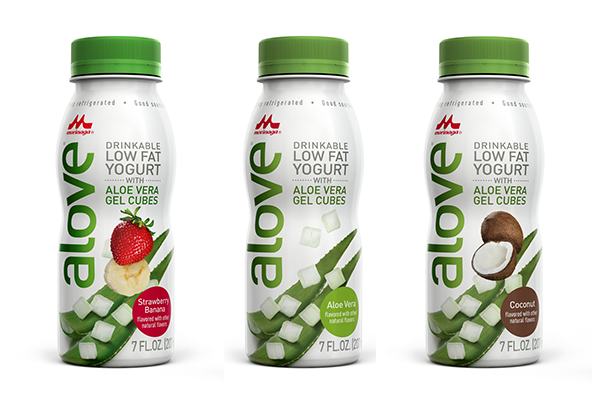 “After launching our Spoonables two years ago, we wanted to have a Drinkable option to continue to capture the market and expand our offering,” Colleen shared with me. “Our market research has shown that our Spoonables are trendy with women, but with our new Drinkable product, we’re shifting our target to a broader audience. It’s so convenient—shoppers just have to shake it and they’re ready to go.”

If you’ve ever found yourself in a bubble tea shop, then you’ve probably already caught a craving for aloe vera. For most of the mainstream consumer audience, however, aloe vera exists beyond serving as a delectable addition to a host of treats and drinks. The team behind Alove is working to change that consumer consciousness with its new Drinkables, which is the only Japanese-style Drinkable yogurt with aloe vera gel pieces.

“We’re still in that phase of newness since we just launched the Drinkables at the end of September. In the Asian and Latino markets, the Drinkables have taken off because people already know about aloe vera. Now, we’re trying to capture the mainstream consumers by educating them on what aloe vera is and why you can eat it,” Colleen explained. “There is a lot of goodness to eating yogurt with aloe vera, so what Alove has done was to combine those ingredients together for a refreshing, creamy, smooth tasty drink.”

The conventional, the ordinary, and the once-mainstream are no longer doing the trick for retailers or consumers, which has led both parties to go on a hunt for the bold and the new. Colleen insists that aloe vera is exactly the unique flavor, new innovation, and up-and-coming product that the dairy market has been looking for.

“It’s very refreshing. Also, it’s a clean addition, so the Drinkables fit under the health trend, too,” Colleen noted. “In addition, certain yogurt styles that have been popular with consumers in the last couple of years are starting to decline. We think that since we’re the first to market Japanese-style yogurt, which is a country of innovation, we have a real chance at capturing the market. To support this strategy, we’re doing IRCs, sampling events, and in-store demos and promotions on top of a heavy marketing push that includes advertisements on digital, radio, and even connected television.”

The Drinkables are available in three flavors—Coconut, Strawberry Banana, and Original—in 7 fl. oz. bottles. They can be found at Albertsons Southern Division, Tom Thumb, Pete’s Fresh Market and many Asian and Hispanic markets. Check out where to find Alove Drinkables at aloveyogurt.com.

If Winter Fancy Food Show is in your future, be sure to swing by booth #6159 to try Alove’s new Drinkables for yourself! And for more deep dives into the latest happenings in the deli, dairy, bakery, and specialty food space, keep swinging through Deli Market News.

Real California Milk Innovation Competition Takes on Snacking With the...

We came from Japan with a different idea. To mix yummy yogurt, with the succulent inner parts of the aloe vera leaf. Imagine refreshing cubes of aloe floating in silky smooth yogurt. ...

The meat purveyor brings old-world mastery into the modern day with the launch of a new lineup...

The plant-based meat innovator divulges why these pivotal packaging implementations are a game-changer...

Expanding its diverse portfolio, the specialty brand unveils its latest release in this dynamic sector...

A monumental move puts the retail behemoth in a strategic location, opening avenues to accelerate growth...

The baking behemoth touts a powerful strategy to skyrocket to the top of this competitive market...

A debut format shakes up this dynamic retail sector, unveiling an all-new approach...