See how Walmart, Albertsons, and more fortified their businesses to nab increased revenue despite pandemic-related hurdles

Delivering year-over-year (YoY) growth, a group of companies in the retailer sector have shown their capabilities in the face of ongoing pandemic and supply chain challenges, earning them a spot on GlobalData’s list of Top 25 Retailers by Revenue for 2021. Among those that made the ranking were Albertsons, Walmart, and more, each delivering YoY revenue growth of over 8 percent.

As noted in a release, higher revenue, improved operational performance, and reduction in expenses led to an increase in the net earnings for Kroger, Sainsbury, Loblaw, Costco, Ahold Delhaize, Amazon, Carrefour, and Albertsons.

The release went on to explain that improvement in e-commerce allowed retailers to focus on shopper-centric initiatives. This in turn led to the development of new business models to help support consumers in contactless communication—something of which shoppers want more and more. 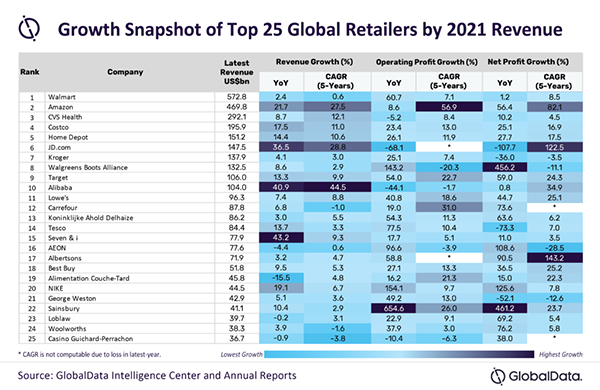 Part of this revenue success is due to the grocers’ abilities to adapt to the changing consumer behaviors sparked by the pandemic and swiftly improve their e-commerce options.

What companies are on track to make this list for 2022? Stick with Deli Market News as we provide the latest insights.