Let’s face it, we all prize convenience. And delivery services like Grubhub are here to snap up every online order. So, when the company released findings from its annual “Year in Food” report, the DMN team were both equally shocked and in agreement with most of the trends on the lists.

According to the press release, Grubhub analyzed tens of millions of orders placed by more than 21 million diners on its platform to uncover which cuisine, fast food trend, and niche item is the latest consumer craving. If you’re a Grubhub devotee yourself, the company has also drafted up every diner’s personalized “Taste of 2019” to allow consumers to look back on their ordering habits throughout the year as well. 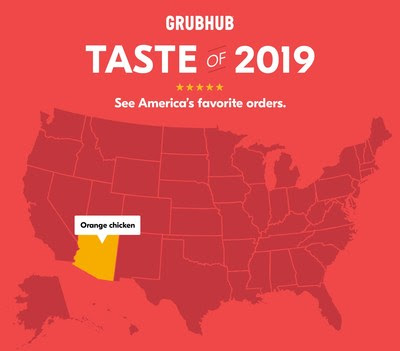 So, what was the most ordered item of the year? Apparently, cauliflower pizza. The veg-for-dough dish took the hearts of diners everywhere, rising 650 percent in popularity. To which, I’m not surprised—my friend still reminds me of that one cauliflower pizza I made ten years ago. And since vegetarianism, veganism, and flexitarianism are rising, seven of the top 10 orders were vegan- and vegetarian-friendly dishes, leaving plant-based food options to most likely be a long-time contender. Leading that pack is the Impossible Burger, boasting a more than 200 percent rise in popularity for the meat-alternative option—most loved in New York and California, not so much in Indiana and Iowa.

Bacon, egg, and cheese biscuits claimed the breakfast category while buffalo chicken empanadas took late-night cravings. As for dessert, the butter cake sneaked in not-so-sneakily, raising in popularity by 641 percent. What most shocked the DMN team (well, mostly me) was the size category. Osetra black caviar came in as the biggest single-item splurge—$285 for 30g to be exact. Also worth mentioning is the largest non-catering order—over 300 tacos for a Halloween party—and the smallest order, a single hot sauce packet. Whether those two are correlated is up in the air.

With so many delivery orders being placed on a daily basis, some good was woven in by the company. Diners had the option of rounding up the final total, culminating in Grubhub donating more than $10 million to support organizations such as No Kid Hungry, the James Beard Foundation's Women's Leadership Programs, and NYC Kids RISE.

Check out Grubhub's “Year in Food” report for the full list of trend-setters, and keep reading Deli Market News as we report on the latest.