What caused the company's stock to skyrocket last month? These factors combine for the jump

Sysco looks to be on the rise, and if these analysts are correct in their assessment, is showing no signs of stopping. With shares last month rising a notable 10.7% analysts according to Fox Business are stating the company’s stock is on the move due to its fiscal results, as well as what may be in the future.

Sysco’s acquisition of Britain-based Brakes Group for $3.1 billion earlier this year is also being credited for the stock jump. The new business boosted Sysco’s stock through increased revenue numbers and margin gains. 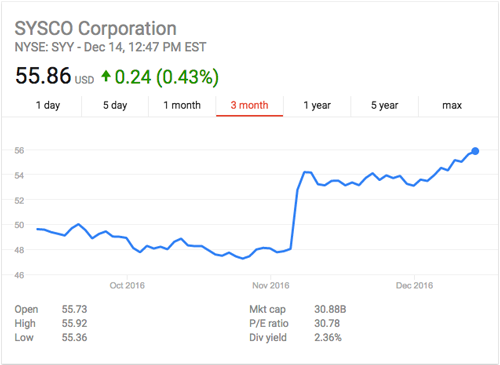 Some analysts, Fox Business continued to report, are also speculating that these gains are just a sign of larger movement to come. These analysts stated that market predictors expect the restaurant business to increase with prospective legislation pushing tax cuts and fiscal stimulus that may be on the horizon as political institutions within the U.S. prepare to shift. As the push for restaurants increase, thus would Sysco’s services.

Also, as Republican sectors prepare to gain more representation, there have been talks that the previously squashed Sysco and US Foods merger may soon be back on the docket.

What kind of year will Sysco see for the rest of 2017? Deli Market News will keep a close eye on the situation.