A cheesemaking legend, with stories connected to Savencia Cheese, passed away peacefully at the age of 87

Dorothy Demeter, a lifelong resident of Lena, IL, and the granddaughter of patriarch cheesemaker Frederick Kolb, passed away peacefully in her sleep on May 4. Born on January 9, 1932, Dorothy grew up amidst family dairy and cheesemaking operations at an early age. She also raised chickens, loved to sit among the beehives which her father hosted in their backyard, and enjoyed creating sketches and working with watercolors.

When she graduated from Lena High School in 1949, her father suggested that Dorothy attend a university for further technical training. She was accepted into Iowa State’s dairy science department and graduated with a bachelor’s degree in Dairy Industry. She then returned to the family factory to improve and direct Quality Control/Product Development for the Kolb-Lena Cheese Company. She is remembered as the first woman to enter and complete the Dairy Science program at Ames, Iowa.

As the program required, she had to lift ten gallon milk cans into the pasteurizer as well as other standards required of the “men’s only previous curriculum.” Dorothy proved her muster, and fellow classmates accepted her and treated her with respect. Some of them became lifelong friends and innovators in the cheesemaking industry. 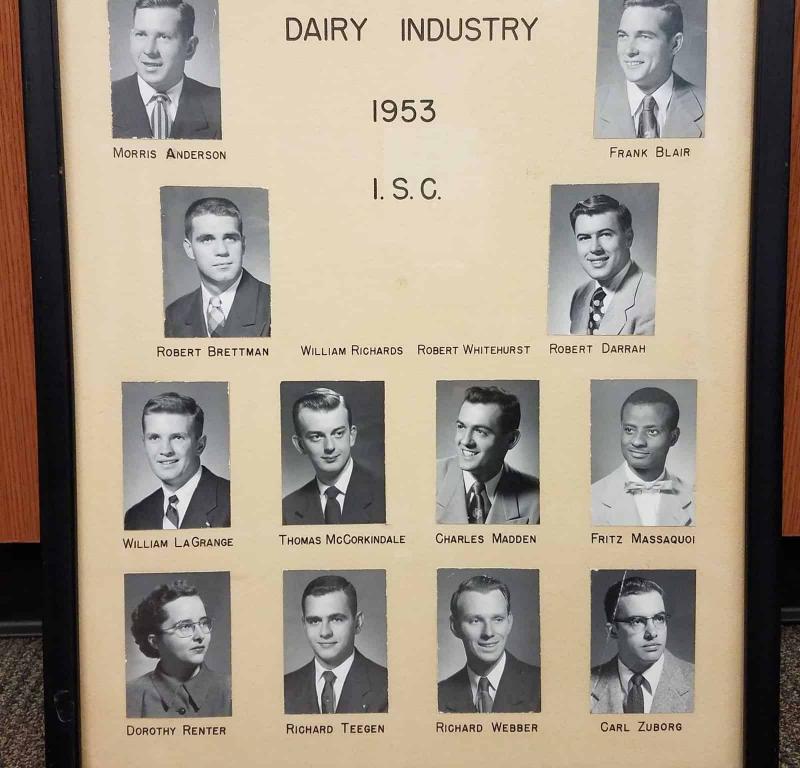 Two years after her graduation, a fellow Dairy Science Master’s Program Graduate—James C. Demeter—arrived at Kolb-Lena Cheese to gain further cheesemaking experience before returning to his homeland of Greece. He made a return visit and married Dorothy. Both of them devoted their lives to Kolb-Lena’s growing production of European-style cheeses and continued the award-winning Illinois State Fair Cheese entries and Cheese Displays.

In 1983, the pair achieved their dream to design and build a state-of-the-art cheesemaking operation located on Highway 20 and Sunnyside Road in northwestern Illinois. Savencia Cheese now owns the operation and after learning of the Kolb-Renter legacy, inaugurated a branded line of artisanal cheese in Dorothy’s honor. It is now sold in supermarkets, specialty stores, and online nationwide.

After work hours, Dorothy kept busy with community activities including: Organist at St. John’s church, Lena Women’s Club, St. John’s Women’s Society, Stephen’s Ministry, Lena Historical Society, the National Cheese Institute, and Lena Library donors. For many years, Dorothy and her friend Esther Cox, co-chaired the Lena Combined Fund which they organized to consolidate the many “door to door” fundraising campaigns that were occurring in Lena. The operation was supported by volunteers who walked the blocks to complete the once a year campaign drive.

Dorothy was preceded in death by her father (Karl M. Renter), mother (Frieda K. Kolb), and step-brother (Henry Renter). She is survived by four children: Helen, Fred, Jim, and Katherine. She also adored her eleven grandchildren and six great grandchildren. Dorothy and Jim’s dairy industry experience, knowledge, and mentorship continues in the professional work of their two sons, Fred and Jim, and fifth generation cheesemakers, grandsons Darryl and Nate.

Dorothy also has compiled a family history booklet on “The Kolb Family, Pioneers in the Cheese Industry,” which will be re-released for sale at the Monroe National Historic Cheesemaking Center. All proceeds are donated to the museum.

A memorial fund has been established for St John’s Lutheran Church and the Lena Historical Society.

We here at Deli Market News express our sincerest condolences to Dorothy's family.