The company announces growth, as well as more mergers and acquisitions

United Natural Foods, Inc. is seeking to grow in the grocery category as it closes out the second quarter for its fiscal 2016.

“We are intently focused on managing our business in a rapidly changing environment,” Steven L. Spinner, President, Chief Executive Officer & Director of UNFI, said in regards to the current market, according to the financial report. “We will make strategic investments to improve our sales growth rate and customer experience through the back half of this fiscal year and into fiscal 2017.”

Much of that growth, Spinner said on the company’s follow up earnings call earlier this week, will include restructuring its operations to be more regionally-focused, with each region having a President responsible for all of products and services within their respective territories, including fresh, grocery, wellness, e-commerce, food service, and gourmet ethnic offerings.

“Today, we announced several important changes to our organizational structure,” Steven L. Spinner, said in an earnings call. “It is a change that we believe brings our teams closer to the retailer/operator and will serve as the primary driver towards an exemplary customer experience across all of our companies. Beginning in August 2016, UNFI will be structured more regionally with the Pacific, Central and Atlantic regions. This is very exciting news for UNFI as we structure resources across our business to fuel even stronger customer relationships.”

Particular highlights for the company’s second quarter of 2016 included: 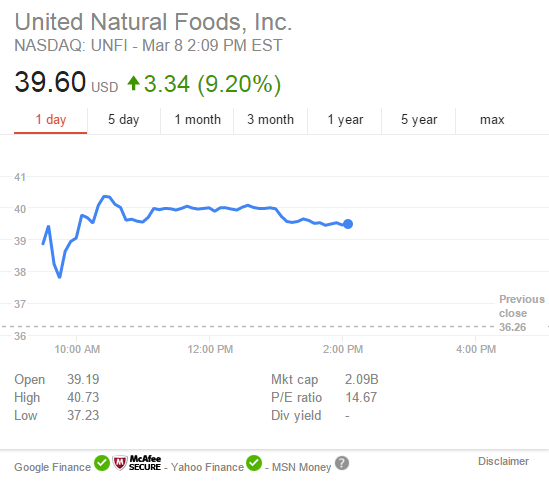 “We believe our infrastructure, supply chain, and logistics network are uniquely positioned to add meaningful value to customers in an evolving food retail environment,” Spinner said.

A big part of that appears to be more mergers and acquisitions, with the new purchase of certain assets from Global Organic coming out with the financial report, just days after the company announced it entered an acquisition agreement with Haddon House Products, Inc.

Is this the beginning of a bigger footprint for UNFI in the industry? Keep checking in with DeliMarket News as we continue to track its growth and any others that could hold sway in the market.