US Foods Beats Expectations for Q4 and Fiscal 2016 Report

Coming off of five acquisitions in its first public year, CEO Pietro Satriano comments on what’s ahead for 2017…

As fiscal 2016 comes to a close for foodservice titan US Foods, the company has reported strong findings and increases due, in part, to five acquisitions in its first public year.

“Our Great Food. Made Easy. strategy drove our strong performance, resulting in increased case volumes and improved profitability,” stated CEO Pietro Satriano. “In our first year as a public company, we grew volumes with Independent Restaurant customers well above market rates and expanded profit margins in a challenging, deflationary environment. We also expanded both our broadline and specialty distribution capabilities through the successful integration of five acquisitions in the last year. Our focus on driving higher volumes with our targeted customers, expanding Gross profit, and reducing our operating costs resulted in full year Adjusted EBITDA above the high end of our guidance range.”

According to a press release, the company noted that during its fourth quarter, its net income increased to $87 million, with a 3.9% increase of its Adjusted EBITDA to $265 million. The company also saw a net sales decrease of 4.3% to $5.7 billion, and a gross profit decrease of 4.7% to $1.0 billion.

Highland Mirror noted that Wall Street estimated US Foods to hold a profit of $0.49 Earnings per Share when posting its results, US Foods reported an EPS of $0.53 beating that expectation. As of today at 10:25 a.m. (PST), the company reported a stock price of $27.65 per share, and a price-to-earning ratio of 29.91.

These findings contributed to US Foods’ fundamental measures marking improvement throughout the course of fiscal 2016. Notable aspects to the year-end report include the following, when compared to last year:

So, what strategies is the company looking to utilize for 2017, to keep up its momentous growth? 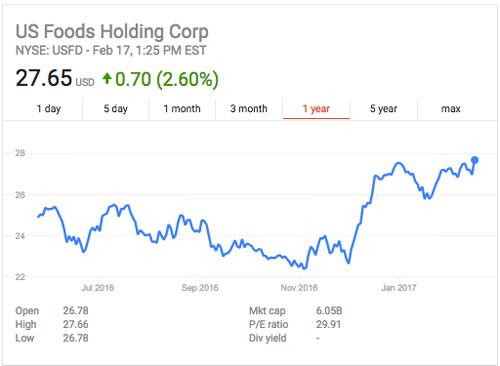 “Looking ahead to 2017, we will remain disciplined in our efforts to drive improved volumes and profitability and expect to deliver full year results in line with our mid-term guidance,” Satriano continued.