Changing its direction as the brand reaches its 10 year anniversary

In an effort to tap into one of its key consumer bases, Cargill has announced it will reposition its Rumba line of fresh meats with an emphasis on the Hispanic market. A segment of the population that typically values traditional ethnic food, the U.S. Hispanic population is also one of the fastest growing, approaching 20 percent of the nation's total and possessing estimated purchasing power of $1.7 trillion by 2017.

"Previously positioned as a multicultural product line, Rumba was trying to be too many things to too many consumer segments,” explained Carolina Tabares, Senior Brand Manager for Rumba Meats®. “We learned that Hispanic consumers are truly interested in a line of variety meats that allows them to enjoy traditional dishes by incorporating quality ingredients to create the eating experiences and flavors representative of their culture and heritage."

After exploring several options and carefully selecting colors, images, and words relevant to Hispanic consumers, Rumba’s marketing squad tested everything from its new packaging, logo, point-of-sale materials, online advertising, and tagline, with consumers. Vibrant colors, such as red, blue, yellow, and green hues that were selected for Rumba imagery, are common throughout Hispanic culture.

"We want Rumba to be a celebratory part of people's lives, providing consumers with meat products that will help them produce authentic, traditional, dishes they told us they enjoy preparing for family meals," added Tabares. "Traditional dishes make Hispanic family mealtimes special and we want Rumba Meats to help families make those gatherings memorable.” 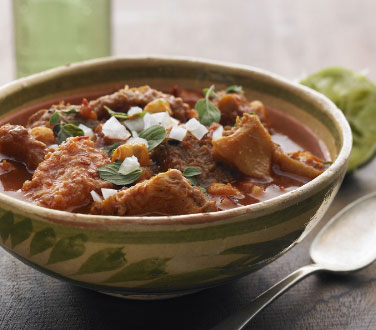 According to a press release, Rumba’s new marketing elements include the following:

Cargill says that most of its new marketing elements incorporate what's being called the "dancing lady" graphic, representing the culture, tradition, and celebration the brand embodies. Keep an eye out, as Rumba’s new image is currently rolling out to retailers nationwide.