How is the company scaling up traditional sausage making methods and expanding operations with new products and partnerships?

Though you may not know Martin Wallner by name, you may well be familiar with his wares—and even his alter-ego Chef Martin. For years, under the Chef Martin Old World Butcher Shop brand, Martin has been crafting artisanal sausages in small batches using the highest-quality ingredients and recipes passed down for generations. And with an expanding retail operation to round out the company’s foodservice-tested product line, Martin is bringing some of the best wurst around to markets across the nation.

I recently had the opportunity to catch up with Chef Martin and learn more about the nearly ninety-year-old origin of the company’s craft meat enterprise. 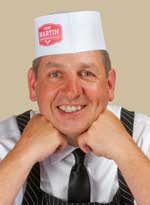 “I grew up in Austria, in Graz, the country’s second largest city. My grandfather had a butcher shop there—a sausage shop. It started in 1929,” Martin tells me. “In those days—It was before supermarkets—there were 66 little butcher shops—sausage makers—in my hometown. There were seven outdoor markets year-round. We would go buy our protein at the butcher shop, the bakery for our bread and the local market for our produce. Back in those days, purchasing food for your family was done very differently.”

By the time Martin’s father took over the family business in the early-1970s, ‘the supermarket revolution’ was transforming the fresh food retail landscape in Austria. Sensing a sea change that would eventually bring the number of sausage makers in their hometown from 66 to five, Martin’s parents decided to shutter one of their butcher shops and convert the other into a restaurant. 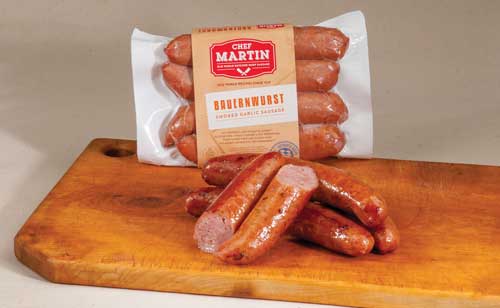 “When we closed the business in the seventies, my father opened the restaurant, and he told me: ‘in a few years there aren’t going to be anymore butchers; I don’t know if you want to become a butcher. You may be better off becoming a chef,’” says Martin. “And I always loved food, so I became a chef.”

After an apprenticeship in Austria, and stints in Toronto, Canada, at the World Trade Center in New York, in Puerto Rico; Vienna, Austria; Minneapolis, Minnesota; Martin settled in Germany. But in 1998, finding his work unsatisfactory, Martin decided to move to Chicago, Illinois, where he began to work for Wolfgang Puck. Martin working his way up to Regional Kitchen Director, a position he held for a number of years. 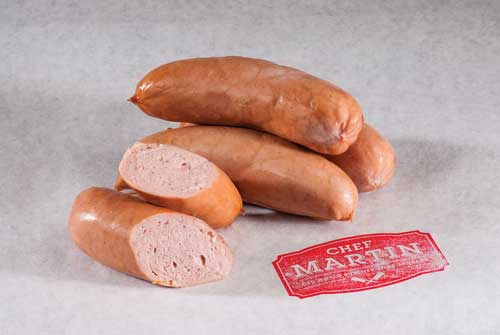 But after having his first child in 2006, Martin decided he wanted to change professions, revisit the family business in which he spent his own childhood, and create a line of sausages that he would feel comfortable feeding his own children.

“When I started reading the labels, I thought, there’s a lot of stuff in these that doesn’t sound healthy—corn solids, fillers, nitrites—and I thought: I should start using the recipes from my family and start making sausage,” Martin explains. “When I was a kid, we learned everything from scratch. We went to the slaughterhouse picked out the hog, and making sausage was a family affair. Everyone was there—my father and my grandfather—and we made some beautiful sausage, and that’s where I learned that this was really fun. I knew from a really young age that making sausage was something I wanted to do.”

Martin soon rolled out what was then Chef Martin’s Alpine Brand sausage company, developing recipes with a co-packer and selling sausages out of a cooler to several clients in local German neighborhoods. Martin’s operation was expanding and he soon connected with a local distributor, Fortune Fish & Gourmet. Martin joined the company as Corporate Chef and brought Chef Martin along with him. Last year the fruitful partnership netted $1 million in sales.

“Right now Fortune Fish & Gourmet is in 11 states with direct distribution. We have about 80 truck routes, so we go anywhere from Indianapolis to Detroit to Madison, Milwaukee, to Des Moines, Iowa,” Martin tells me, noting that he is eager to see the company expand into new markets. “In 2016, we bought a company in Minnesota called Coastal Seafoods to expand our distribution. We’re a growing company. Right now, I’m working with Dean & DeLuca in New York; we just launched our product line there in June. They serve my products in all their stores and at the U.S. Open Tennis Tournament. I can work with anybody. We’re USDA approved and can ship anywhere in the U.S.—fresh or frozen.”

Chef Martin’s products are available to both foodservice and retail customers. In fact, Martin noted, the company has recently undergone a rebranding of its retail line, offering the same quality meats—free of antibiotics, hormones, added nitrates and MSG—in a fresh new package. Chef Martin’s retail products are currently available in approximately 250 stores throughout the Midwest. And the sausage maker is currently expanding his product line and footprint, nurturing new partnerships with retailers large and small.

“I just launched an Andouille sausage two weeks ago, a new retail item, because some customers were asking for it,” Martin tells me, explains. “I want our customers to know there is a support that goes both ways. I look at it as a partnership, and I’m always looking for ways to support my customers.”

For more on this and other exceptional companies in the dairy, deli, and bakery industries, stay tuned to Deli Market News.