How is this authentic Southern original giving prosciutto a run for its money? Find out in this exclusive

Country ham—the Southern cousin of prosciutto and jamón ibérico—may not enjoy the notoriety among the general public that some of its European relations do, but among chefs, charcuterie enthusiasts, and connoisseurs, this authentic American delicacy inspires a rare sense of enthusiasm.

And Sam Suchoff, Owner of Lady Edison, is a person who can attest this enthusiastic response. Since starting his restaurant The Pig in Chapel Hill, North Carolina, eight years ago, Sam has grown his ham and sausage enterprise from a single kitchen to a burgeoning brand celebrating the highest quality—and highest standard of sustainability—in locally-sourced pork products. 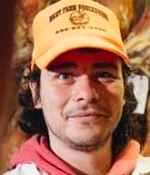 “This whole thing started about eight years ago when I opened a restaurant called ‘The Pig,’” Sam explained to me. “It had been a barbecue restaurant called The Barbecue Joint. I had worked there, and then I went off and did some charcuterie consulting, and in the time that I was gone, the spot went out of business. And through this consulting thing I had formed relationships with all these local farmers and the local slaughterhouse, Acre Station. So when The Barbecue Joint went out of business, I was working on whole hog utilization graphs and that sort of thing—North Carolina barbecue is either shoulder or whole hog—so it felt like an opportunity was sort of dropped in my lap. I couldn’t say no.”

From butchering a handful of hogs each week for use in The Pig’s cuisine, Sam would grow to become a regional name in county ham, a seller of raw pork, and a paragon of sustainable business practices.

“We started making our own hot dogs and our own bacon and all that stuff, but it was all just for the restaurant,” Sam continued. “We were doing three to four pigs a week, and eventually, I started getting the slaughterhouse to do a custom bacon for me—the way we were doing it at the restaurant—and through that, I formed a relationship with a local coop market.” 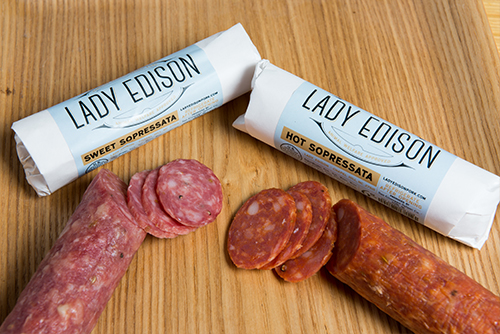 Sam added: “I buy hogs from a coop called the North Carolina Natural Hog Growers Association. It’s a real deal coop; it’s non-profit. It’s got about 19 farmers growing right now, and they’re all Animal Welfare Approved with a certification carried out by A Greener World. A Greener World is a nonprofit. It’s virtually free for the farmers. It stipulates no growth hormones, no antibiotics—and much more. And so, the local coop market got in touch. I’d been selling them bacon, but all their raw pork was not local. It was quality; it was sustainable, but the coop really wanted to do local.”

Soon, Sam had doubled production—with the coop taking its share of middles—in pork bellies (bacon) and loins (pork chops and tenderloin)—and Sam was left with a glut of shoulder and ham, a good problem to have for an enterprising charcutier. And soon Sam was sending his fair share of hams to Rufus Brown—the Curemaster at third-generation country ham house Johnston Country Hams. 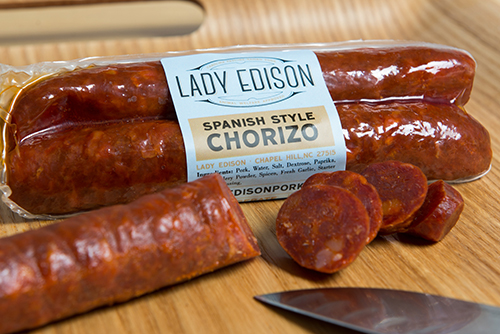 “I had met Rufus probably thirteen years ago. A friend of mine was raising these Ossabaw hogs—hogs found on Ossabaw Island that were direct descendants of Spanish pigs at the time when Spanish charcuterie was the best in the world. I told her that I would help turn these hogs into hams, and I called up Rufus; I called up Sam Edwards who does Surryano Ham in Virginia, and I called Alan Benton,” Sam told me. “Alan Benton was a little far away, and both Sam and Rufus’ hams were great, but there is just something about Rufus’s hams. He gets that funk. There’s no smoke on it. It just tastes like a delicious piece of meat that’s been allowed to come into itself.”

From a handful of hams each week, business would eventually grow to the point where Sam was sending up to thirty hams a week to Johnson County Hams.

“As things continued to progress, our restaurant got busier, and I began to think ‘oh, this ham could be a thing,’ so I started putting up more and more hams. And at this point, we put up every ham we can, and we buy 28 to 30 pigs a week now. Just today I had 56 hams delivered to [Johnson County Hams’ sister company in] Wayne county.”

And just like Lady Edison’s persuasive product and story, the company grew into a brand identity that was both compelling and homespun—an homage to the brand's locality. 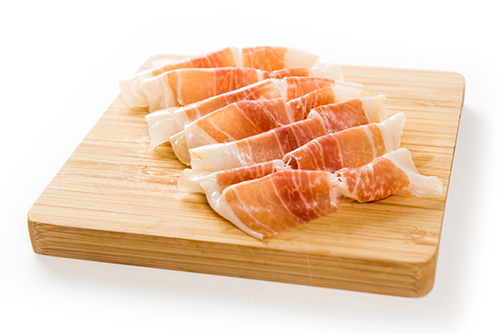 “I was initially looking for a name for the ham, and at first I was thinking of something Spanish sounding,” Sam told me. And despite flirting with the pun Pata de la Brea—a Tar Heel take on pata negra or jamón ibérica—Sam eventually settled on the name of a great North Carolina luminary. “Lady Edison is someone I think I did a research paper on in school. Her name was Beulah Louise Henry—called Lady Edison because she was an inventor and had something like 86 patents. She was from Raleigh, North Carolina, and had this really interesting life. She was like an artist, savant, inventor, socialite—she got involved in politics. She was just a really interesting character, and the name just rang and stuck with me. The more I thought about it, the more I realized that this product doesn’t need to be compared to a Spanish ham. It’s truly a Southern ham.”

After working with The Splinter Group to approximate the look of classic French and Italian poster art, Lady Edison had a brand identity to match its product and marry a nod to European influence with an authentic Southern original.

Lady Edison was honored earlier this year with a Good Food Award for the company’s Sweet Sopressata & Spanish Style Chorizo, and Sam tells me the company sees an expansive horizon despite its commitment to being local. 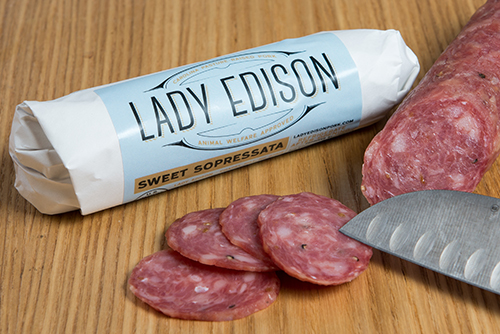 “We’re still expanding. The ham was the first and only thing we were doing, and now we’re working with this guy, Giacomo, who does salami for us, and we’re looking to do more things,” said Sam, who notes that he’s still operating out of a 1,500-square-foot-restaurant, albeit with a network of world-class sustainable pork producers, meat curers, and support from the culinary community of North Carolina and the South.

“It’s the kind of thing that will grow, but it will never get beyond 100 pigs a week,” Sam surmised. “To me, that’s a ton, but to the pork industry that’s tiny. I’m committed to working with the coop and keeping it symbiotic; we’re both working toward a similar goal, and we will grow—but not by too much.”