How are the protein provider and c-store association working to offer 140,000 meals in the build up to the NACS Show?

Tyson Foods and the National Association of Convenience Stores (NACS) have teamed up to deliver a whopping 36,060 pounds of protein to help fight hunger in the Chicagoland area.

“Partnering with organizations like the Greater Chicago Food Depository and NACS is important to us in raising awareness about food insecurity in communities all around the U.S.,” said Mark Purvis, Vice President, Convenience Sales for Tyson Foods, in a company press release. “In this community alone, the Food Depository serves an average 200,000 pounds of food every single day. We’re honored to support those extraordinary efforts.”

The company and association made their donation to the Food Depository, which will distribute the donated food—the equivalent to 144,240 meals—through its network of partner agencies, including food pantries, soup kitchens, and shelters services across Chicago and Cook County. 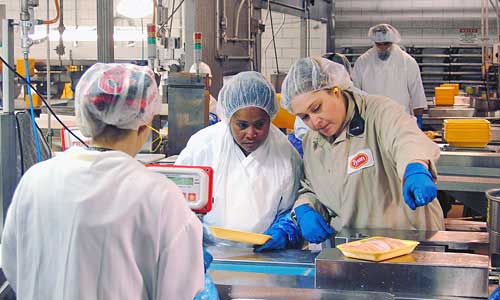 “The Greater Chicago Food Depository is grateful to Tyson Foods for its longstanding partnership in the fight against hunger,” remarked Jill Zimmerman, Vice President of Development at the Food Depository. “Donations of protein are important to our work of providing nutritious food options for our neighbors in need. We thank Tyson for this generous contribution and its ongoing support of our mission.”

Tyson Foods’ “KNOW Hunger” campaign is focused on helping more people understand and join the effort to eliminate hunger in America. Alongside partners like Feeding America, Share Our Strength, and Lift Up America, Tyson works to raise awareness and help feed the hungry across the nation. Since 2000, Tyson Foods has donated more than 100 million pounds of protein in the United States.

According to the company’s press release, in 2015, Tyson Foods announced its renewed commitment to hunger relief by pledging $50 million in cash and in-kind donations by 2020 in the fight against hunger, with a special focus on innovative initiatives at the local level.

The NACS likewise noted a commitment to community involvement and giving back to those less fortunate.

“We truly believe that c-store doesn’t just stand for convenience store – it also stands for community store, and we are proud to join Tyson Foods in supporting the Chicagoland community that we call home this week during the NACS Show in Chicago,” said Jeff Lenard, Vice President of NACS’ Strategic Industry Initiatives.

NACS will hold its annual NACS Show at McCormick Place in Chicago from October 17-20. More than 20,000 attendees from 50-plus countries are expected to attend the event—one of the largest tradeshows in the country. The show features four days of general sessions, more than 50 educational sessions, and more than 1,200 exhibiting companies.

To learn more about the Greater Chicago Food Depository and its hunger relief efforts, visit https://www.chicagosfoodbank.org/.