The burgeoning, category-expanding brand is bringing its innovative concept to investors in front of millions of viewers

As Delighted By’s innovative and healthful Dessert Hummus continues to grow both the hummus and burgeoning all-natural dessert categories, the two-year old company has been making headlines and captivating consumers with flavors like Vanilla Bean, Snickerdoodle, Choc-O-Mint, and Brownie Batter.

And now, the burgeoning brand is spreading its glitter and coming to prime-time television with an appearance on ABC’s Shark Tank slated for Sunday October 15th. I recently caught up Founder Makenzie Marzluff to find out more about the company and Makenzie’s experience swimming with the sharks.

Q: How did Delighted By’s participation in Shark Tank come about?

MM: I initially applied to Shark Tank in 2015, at a time that I was making my dessert hummus out of my kitchen in 8-hour periods, solo. I was wearing every single hat in my business. After an overwhelming farmer's market one day, I knew it was time to get some assistance...aka capital! As I was driving home, I thought 'I should apply to Shark Tank.'

Shark Tank responded to my application rather quickly. I remember my heart pounding when answering that first call! 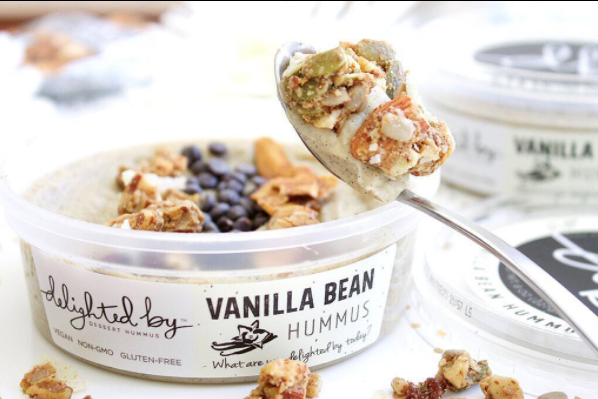 The business ended up being too early-stage for Season 7; I then applied for Season 8 in 2016, and while I got to later rounds, it still ended in the same result...no filming. For Season 9, I decided to not apply. The Shark Tank producers knew me and Delighted By well enough by then—I thought 'they will reach out if they're interested in my applying again.' And then they did! After lots of interviews, paperwork, and months of preparation, my episode was filmed in June of this year. Third time's a charm!

Q: What prompted Delighted By to appear on Shark Tank? What were the company’s goals for the appearance?

My goal for being on Shark Tank was to raise 'smart money.' Considering this was my first time being in the food industry, I thought that having a shark on my side would help Delighted By with distribution, marketing, and of course, the funding. 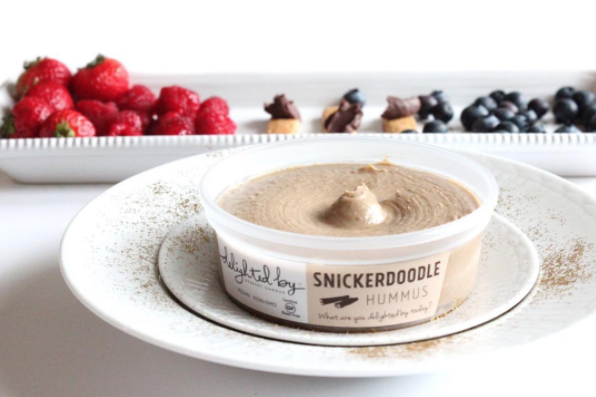 With a product as new and different as 'dessert hummus,' the more education/awareness there is the better. I knew that in addition to the potential of raising capital, Shark Tank would provide a platform for America to learn what dessert hummus is, and how to eat it.

Q: What makes Delighted By a great investment opportunity for the sharks?

Delighted By Hummus is a great investment opportunity because it's the first in the category; its a rising and growing trend, which is shown in our sales & the amount of people sharing it on social media. We are scaling quickly, growing distribution, and ensuring our brand is locked in along the way. In just over our first year being on shelves, we did $1 million in sales; and that was with one full-time team member (me) and little industry knowledge. We are now on our way to a $5 million second year. Delighted By has already proven the concept of dessert hummus, and with even more awareness & education, the demand will only continue to grow.

Q: What was the experience of being on/preparing for the show like?

Preparing for the show was an intense process that lasted for several months. Rehearsing the pitch itself, designing the display, and going over the numbers of the business took up the most of my time. In fact, by the time the episode was filmed, I was quite relieved to be able to bring my focus 100 percent back to the business itself. 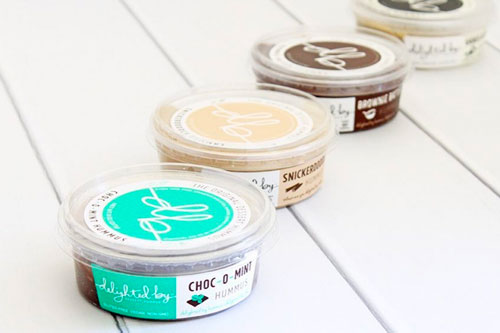 The day of filming was one of the most intense days of my entire life. I've never had so many questions thrown at me all at one time. I can't say too much more, but be sure to tune in on ABC Sunday October 15th.

Q: Has Delighted By prepare for the inevitable surge in interest that will follow the appearance?

Absolutely. We have been preparing for months. From the website, to sales, to social media and beyond. We have hired twice since the filming itself, and by the time our episode airs will have nearly quadrupled our distribution (With Publix, Jewel-Osco, Harris Teeter, and Whole Foods Northeast being the most recent additions). It's a busy time, to say the least. People think that when you make it to Shark Tank, that business is smooth-sailing from there. While I lead with a positive attitude daily, I indeed have to remind people often 'we are still a startup.' We are still operating with a small team, so time and resources are precious.

While not at liberty to discuss the specifics of the episode until its air date-- Sunday October 15th –with a proven concept that both taps into consumer trends and is inspired by a sincere ethos and passion for making the best product possible, the sharks should find Delighted By’s dessert hummus a substantive bite. And if you are still skeptical about dessert hummus, Makenzie tells me, this one-minute video should change your mind...

For more on fresh food innovations, stick with us at Deli Market News