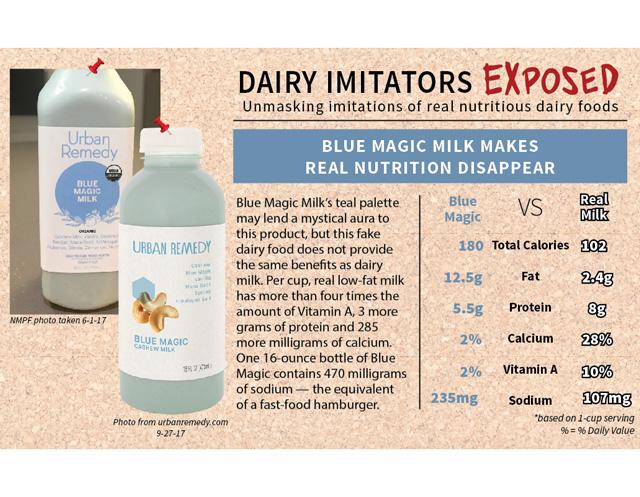 In a letter sent today to the federal Food and Drug Administration, and the California Department of Food and Agriculture, NMPF said that the continued use of a standardized dairy term, “milk,” on a plant-based imitation made mostly from nuts and water, is a violation of standards defining milk as the product of a dairy animal.

“Beyond ignoring clearly-defined regulations specifying what milk is, this ‘Blue Magic’ product is an affront to consumers seeking appropriate levels of nutrition for their families,” said Jim Mulhern, President and CEO of NMPF.  “It’s obvious that this beverage is not a nutritional substitute for real milk, regardless of its desire to co-opt dairy terms.”

NMPF first evaluated Blue Magic Milk, manufactured by California company Urban Remedy, in June 2017 as part of a marketplace survey examining the nutrients in imitation dairy foods. NMPF found that of the 244 beverages it reviewed, Blue Magic’s two-cup serving contained the highest sodium content, grams of fat and calories. Even a half-serving (1 cup) featured the highest calories and fat of all products surveyed, and was second highest in its sodium level.

By contrast, real low-fat milk, per cup, has more than four times the amount of Vitamin A, 3 grams more protein and 285 mg more calcium as Urban Remedy’s imitation version. Additionally, a serving of Blue Magic has 78 more calories, 10 grams more fat and 130 milligrams more sodium. An entire 16-ounce bottle of Blue Magic contains 470 mg of sodium — the equivalent of a fast-food hamburger

Today’s action is the second time this year that NMPF has raised objections about Blue Magic Milk.

Following its review of imitation products, National Milk brought its concerns to the attention of FDA and the California Department of Food and Agriculture in letters sent in June to both agencies. Shortly thereafter, Urban Remedy made minor alterations to the beverage’s label, renaming the product as “Blue Magic Cashew Milk.” However, given that the beverage still uses a standardized dairy term, without offering the same nutrition as real milk, NMPF has sent a second letter to the agencies pointing out the continued problem with the labeling of the product. 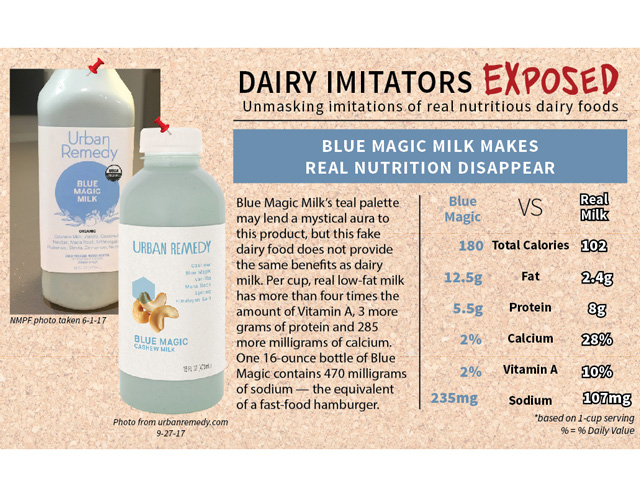 This action against Blue Magic Cashew Milk is part of a new, recurring campaign created by NMPF that will call attention to other food brands that inappropriately label their products using dairy terminology. The series, titled “Dairy Imitators: Exposed,” will draw attention to these products’ lack of compliance with federal standards, and their nutritional deficiencies when compared to real milk, yogurt, cheese and other dairy foods. Each month, a new graphic will feature an imitator’s labels and nutritional information next to those of various cow’s milk products. NMPF also will be writing to federal and state agencies about the imitation products, pointing out their violations of standards of identity.

“This campaign will further demonstrate to consumers, FDA and makers of these plant-based alternatives that National Milk will remain focused on the issue of deceptive labeling tactics,” Mulhern said. “Despite their desire to mimic real dairy foods, none fully matches milk’s nine essential nutrients.”

Each new graphic will be added to NMPF’s gallery of imitation dairy products on its website, in addition to being shared on social media and in NMPF’s quarterly Regulatory Register, which is also available online.

The Expo West Experience Is Going East in 2020