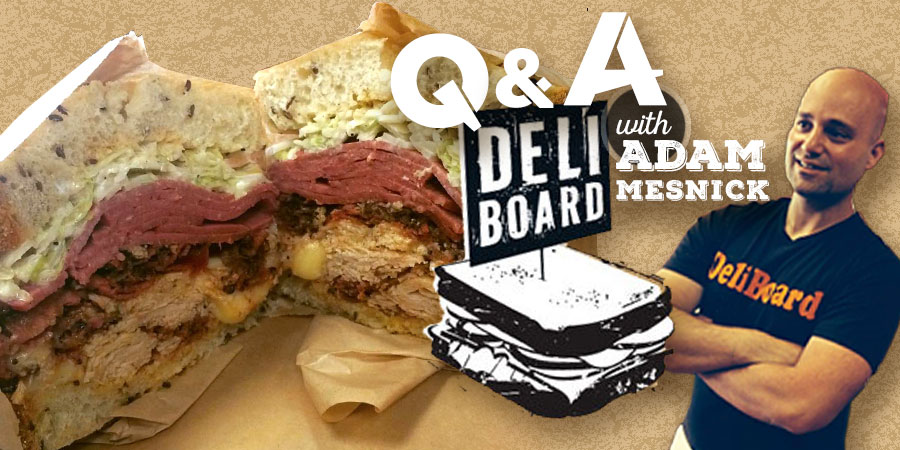 EXCLUSIVE: What was Deli Board Founder Adam Mesnick's gateway sandwich? We find out that and more

We had the opportunity to ask the owner of two wildly popular sandwich spots, Deli Board and the Rye Project, located in San Francisco, a few questions to gleen some kernels of knowledge about the experience of running a successful sandwich enterprise. So, without further ado, Adam Mesnick, Owner, Deli Board & the Rye Project:

Question One: In this SF Chronicle article, you are quoted in regards to the unique challenges of being owner of a deli sandwich establishment in a neglected neighborhood, "If it was easy everyone would be doing it." Any advice for someone starting their own deli who would like to be successful at it, or pointers for a deli operator that wants to be more successful, as in drawing more of lunch crowd?

Adam: I think that deli and food business in general is a very difficult business for anyone to succeed in.  The glamour is the final product and the ability to make it appear seamless. Behind the scenes we work on minor details that again appear to be simple, but are complex and costly. We work hard everyday.

Without passion for food and my ability to share that with others I probably would have never made it. I have an amazing team of people who are also very passionate about what it is we do, and they take pride in the work they do.

I think Deli Man is a great movie. Ziggy, the owner of the deli reminds me of myself. Though we have different goals and serve different deli style food we are also similar. He lives for his food and the people he feeds and also thrives on it. It's not all about money. In fact? If it were for money, there may be no cooks left.

My advice would be to be very serious about your product and practice perfecting a few things. Again, if it were easy, everyone would be self employed.

For me it's not work, it's my everything.

What has been key is building on the foundation and beliefs that we were built upon starting in 2009. We have morphed over time, and had plenty of growing pains. Slow and steady wins the race. I am relentless.

Question Two: What's your most popular sandwich this season so far?

Adam: So far this season the breakfast sando bk has been a hit. It's usually only available on Saturdays. But, it has its own following. It actually gets more attention on social media than most others.

For the most part, the menu is solid at both stores right now and you can't go wrong.

Question Three: What would you say the draw is that keep your customers coming back?

Adam: Consistency. Great food and great service bring people back. It is expensive food, and could continue to get more costly. I cannot control this. But, what we can control we do. My restaurants are clean, we serve fresh food. People can taste the difference and mostly are not afraid to pay for quality.

Question Four:  If you could expand to a nationwide franchise would you, why or why not?

Adam: I am not quite sure what the future holds for Deli Board and Rye Project. I am more concerned with great quality than multiple stores.  I am looking forward to expansion, but it will also be slow, steady, and need to make good sense. Our food is solid right now. I am very happy with that fact. Two stores in the same city, same neighborhood rather, is enough on my plate right now. It really gives me the ability to be creative and get better at what we do.

Adam: My first sandwich memory. Good question. Grilled cheese was the gateway for me. I was always cooking as a kid. And kids love grilled cheese. So did I. I would love to hold court in the kitchen, even at a young age. It was always where the action was.

I have always had a fondness for food and it has created so many amazing memories for me, family, and friends.

There you have it sports fans. Just a glimpse into the mind of a successful deli sandwich business. Did you learn anything? Let us know if you enjoyed the article or have some input.

And of course, thank you Adam, very much for your kindness and generosity with your time in helping us put this article together. We're big fans!

So, deli-sando addicts and afficianados, if you're in the SF area, definitley check one (at least) of his spots out.

Deli Board has midwest roots, the classic flavors of an East coast deli, and a left coast twist. If that doesn’t make your mouth water you can stop reading now.

Rye Project is the latest venture by DeliMaster Adam Mesnick of the famed Deli Board, who has been looking for a way to bring the best of his Jewish deli food memories from Cleveland, Ohio, to San...