The pizza prank ranks up there with ding-dong-ditch and crank calls as one of the all-time classic pranks, and though not everyone is a fan of them, you have to admire the audacity of someone aiming to take the fake pizza order to new, and regal, heights. Pizza bigwig Domino’s fell victim to the classic trick recently, receiving an order supposedly for the Queen of England herself.

Domino’s received an order for four cheeseburger pizzas to be delivered to Buckingham Palace under the name “Elizabeth”—totally not at all suspicious. A delivery driver for the company hopped aboard his motorcycle with the pizzas and unsuspectingly zoomed towards the Palace, according to Food & Wine. Of course, the moment the driver arrived at the gates, he was immediately stopped by the police.

“The driver was stopped by two armed police officers who got him to get off his bike and park up,” an unnamed source told The Sun. “One of them then radioed through to the control room to check if the Queen had indeed ordered a pizza. The next thing the copper said was ‘Sorry sir, Elizabeth is the name of the Queen—and she lives at Buckingham Palace. I think someone is winding you up.’ The poor guy looked very confused and just rode off.” 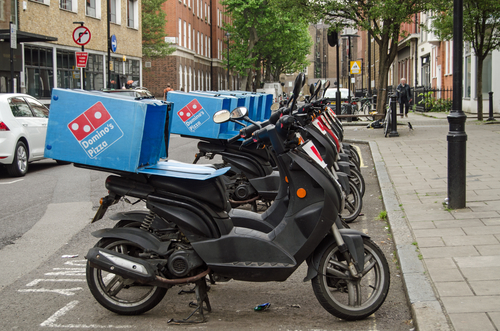 “So an online prank order slipped through the cracks, big whoop,” you might say, but believe it or not this was a phone order, meaning some Domino’s employee actually took down the name (Elizabeth) and location (Buckingham Palace) and thought, “sounds legit.” Domino’s rolled with the punches and took the prank in good humor.

“We’ve always suspected the Queen was a secret Domino’s fan and the order to Buckingham Palace almost confirmed our suspicions,” Store Manager, Zsuzsanna Queiser, said. “We didn’t quite make it past the gate, but the four large Cheeseburger pizzas seemed to go down pretty well with the police officers on duty. Next time, Your Majesty.”

Where will the next prank pizza go to? “Donald” at 1600 Pennsylvania Ave? Deli Market News will be there to report on high-profile food pranks.