Beats Wall Street expectations on an encouraging financial forecast, along with a new CFO appointment

Darden Restaurants saw a boost in its shares during mid-day trading on Wednesday after the company posted a promising third quarter earnings forecast that beat Wall Street expectations.

On an adjusted basis, Darden expects its diluted net earnings per share from continuing operations to be approximately $1.18 to $1.21, surpassing estimates of $1.06 per share, according to MarketWatch. The adjusted results exclude debt brakeage costs from the early retirement of debt and other fees associated with the spin-off of Four Corners Property Trust. 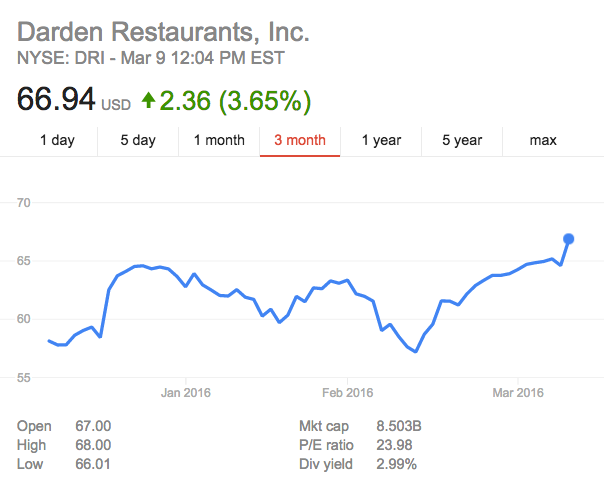 Other highlights from the restaurant operator’s third quarter outlook include:

Additionally, Harald Herrmann, President, Specialty Restaurant Group, said that he will be stepping down from his position, effective August 2016. He will serve as Senior Vice President, Special Projects until his departure.

Darden has also implemented a new reporting structure for its dining brands. The Capital Grille and Eddie V’s and Yard House will become direct reports to CEO Eugene Lee, Jr. Dave George, Olive Garden’s President, will then assume additional responsibilities through oversight of Seasons 52 and Bahama Breeze along with his current role.

“Our continued success and momentum is a direct result of executing against our plan and maintaining our focus on consistently delivering outstanding guest experiences,” Lee said in a press release. “I am confident that the leadership appointments and organizational changes we announced today will further strengthen our organization and will allow us to maintain our positive momentum.”