With significant sales and income increases, how is the retailer reaping even further rewards from its recent merger?

Though Ahold Delhaize have settled in as one whole, it seems it is still reaping the rewards of its recent merger by the looks of the newly-announced third quarter 2017 report.

In it, the retailer notes significant increases to sales and income.

“We reported a strong financial performance again this quarter as margins increased significantly, driven by synergies while savings from our ‘save for our customers’ programs are continuously being reinvested in the business,” commented CEO Dick Boer. “We continue to successfully implement our Better Together strategy and expect cumulative net synergies for the full year of 2017 to increase from €220 million to €250 million (from approximately $255 million to $290 million USD).”

Highlights from the report include: 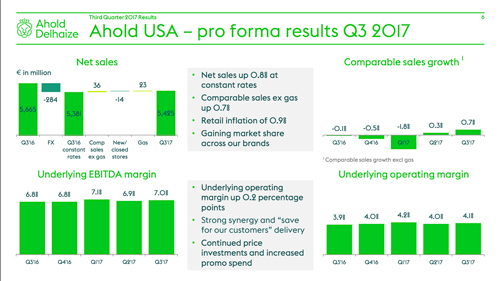 Boer said that, as part of Ahold Delhaize’s omni-channel strategy, the company continues to enhance the leading position of its online businesses both in the U.S. and Europe, which in total, grew more than 20% this quarter.

“We continue to invest in online warehouse capacity and are on track to realize almost €3 billion ($3.47 billion) in online consumer sales this year and nearly €5 billion ($5.79 billion) by 2020,” he added, also noting that the company reaffirmed its fiscal guidance. 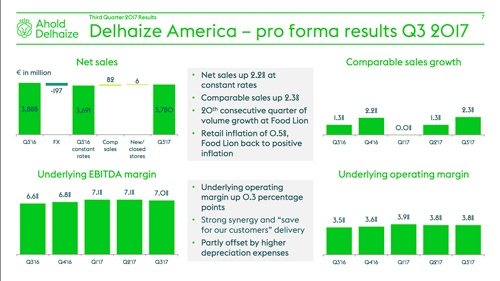 “We reiterate our guidance of €1.6 billion ($1.85 billion) free cash flow for the full year 2017,” said Boer. “Looking forward to 2018, we will maintain our balanced approach between managing our debt, funding growth and returning excess liquidity to our shareholders. For 2018, we expect free cash flow to increase and we anticipate capital expenditure to step up to €1.9 billion ($2.2 billion), focused on improving our store network, expanding our omni-channel offering and further developing our digital capabilities.”

He said that Ahold Delhaize would continue to invest in expanding “digital capabilities and expertise,” reiterating the company’s confidence in its Better Together strategy.

Deli Market News  will keep you up-to-date with more on this and other important retailers in the industry.