The retailer is set to open its first stores in the western U.S. starting next month

Aldi has begun the process of making good on its coast-to-coast plan for the U.S.

The German-originated retail chain has not yet breached the Pacific coast, a fact that is set to change next month with the opening of its first eight California stores, currently slated to open on Thursday, March 24. Those locations are merely the introduction, with approximately 45 planned for the Southern California region. 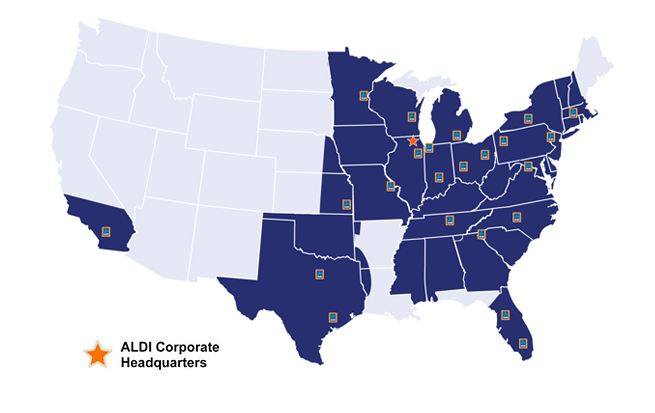 Each store is to be structured with an “easy-to-shop,” consistent layout of 10,000 to 11,000-square-feet and four to five aisles, according to the company.

“Ever since we announced our plan to bring ALDI to Southern California, the positive response from people across the Southland has been overwhelming, and we’re excited to start opening stores next month and throughout the year,” Gordon Nesbit, Moreno Valley Division Vice President for ALDI, stated in a release. “There is a strong appetite among Southern Californians for an alternative place to shop and we are eager to show them the significant benefits that can come from shopping at ALDI, both for their wallets and lifestyles.”

Aldi offers a variety of organic and gluten-free items to meet the current health trends fueling the Golden State, including:

The chain’s excitement to breach California lines is tangible, with an entire “coming soon” page announcing its arrival and asking locals to apply for work - the company noted in its release that it expects to hire about 1,100 people in Southern California before 2016 is out.

The retailer also has three-day-long events planned for each opening, kicking off with those first stores on March 24 at 8:45 a.m.

“We’ve been selling groceries in the U.S. for 40 years, growing deliberately and steadily throughout the country,” said Nesbit. “Shoppers who appreciate high-quality groceries at an exceptional value are everywhere, and California is no exception. We are confident once Southern California shoppers get to know us, they’ll come to love us.”

These new locations are a significant milestone, Aldi said, in its five-year strategic expansion plan. Its current goal is to bring 650 new stores to the U.S., upping its total to nearly 2,000 before the ball drops on 2018.