Which state has been pinned as the new home for the 750,000-square-foot project?

2017 is looking to be a big year indeed for discount retailer Dollar General. The chain has announced a new distribution center to expand and bolster its operations, set to be erected in Amsterdam, New York.

"Dollar General is excited to add another state-of-the-art and highly-efficient distribution center to support our growing store network in both New York and throughout the northeast," said Todd Vasos, CEO. "It's very exciting to move forward on a project that will create more than 400 jobs in Montgomery County. I am grateful for our continued partnership and support on this project from New York Governor Andrew Cuomo, New York's Empire State Development, and local leadership in Montgomery County."

To exact its plans, Dollar General purchased 103 acres of land from the Montgomery County Industrial Development Agency for $1.545 million. The new facility will cost a reported $91 million, according to the Albany Business Review, and will be the retailer’s 16th distribution center.

The 750,000-square-foot facility will service roughly 800 stores in the Dollar General chain throughout the Northeastern states, according to a press release. The company chose Amsterdam for the facility’s location due to its proximity to the region's Dollar General stores, local business environment, workforce quality in the area, and local and state incentives. 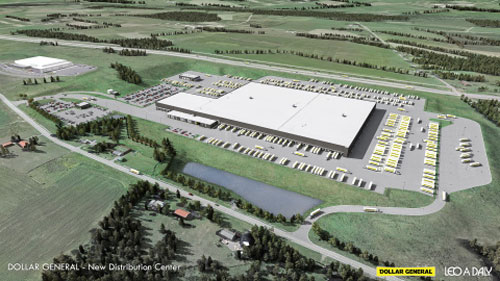 The project is estimated to begin later this spring with a completion date of fall 2018. The facility itself will bring a predicted 430 jobs to the region, in addition to the 200 construction jobs the project will require.

Dollar General seems to be making good on its expansive plans for this year, last making headlines by announcing it would be adding 10,000 workers to its operations. The chain will also be testing a new and smaller store format this year, that will feature fresh groceries.

For all the latest in distribution expansions and new facilities, count on Deli Market News for the latest.