What are these two corporate giants planning in the realm of fresh grocery?

Alexa, make way for Google and Walmart's new joint venture that plans to go head to head with the voice-controlled speaker Amazon has been pushing since late 2014. Teaming up to make hundreds of thousands of Walmart products available to purchase through the Google Home voice-controlled speaker, the duo have slated the project to take root as early as next month.

“Our new voice shopping capability, coupled with our core value proposition, including free two-day shipping and the Pickup Discount, will give our customers a compelling new way to get what they need at low prices,” said President and CEO of Walmart U.S. eCommerce, Marc Lore in a statement. “We will continue to focus on creating new opportunities to simplify people’s lives and help them shop in ways they’ve not yet imagined.”

According to Walmart, the company views this as primarily an easy way to build a basket of previously purchased everyday essentials. Achieved by integrating Walmart’s Easy Reorder feature into Google Express, the goal is to offer a highly personalized shopping experience based on customers’ previous purchases, both in store and online. 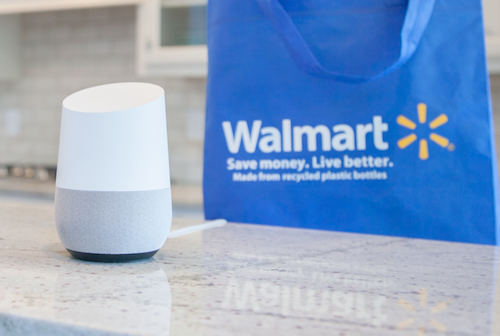 Next year, however, the techy duo will be taking on fresh grocery, according to Recode. Leveraging its 4,700 U.S. stores and giant fulfillment network, Walmart will allow customers to pick up orders of all groceries, including fresh produce, in store and often at a discount through Google home.

“When it comes to voice shopping, we want to make it as easy as possible for our customers. That’s why it makes sense for us to team up with Google,” continued Lore. “They’ve made significant investments in natural language processing and artificial intelligence to deliver a powerful voice shopping experience. We know this means being compared side-by-side with other retailers, and we think that’s the way it should be. An open and transparent shopping universe is good for customers.” 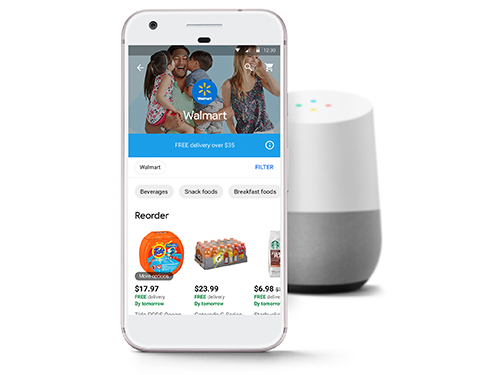 Google first introduced voice shopping to Google Home earlier this year with partner retailers like Costco, Walgreens, and PetSmart, according to Recode, in what looked like to many a clear effort to combat Amazon’s longstanding stronghold of voice ordering technology.

And this isn’t Google’s first attempt to take on Amazon. Recode reports that Google has found itself competing more closely with Amazon as shoppers increasingly turn to the e-commerce giant in lieu of a traditional search engine, costing Google substantial ad dollars.

With Google joining Walmart’s side in the increasingly cutthroat grocery wars, will Amazon be able to stay at the forefront of the competition? Deli Market News will continue to report.

Shop for what you need all in one place, add items to your cart, select a delivery window, and check out using Google Payments. We'll process your order in the store and arrange for a driver to...