“The previously reported challenges in Western Canada that have had a negative effect on our results over the past three quarters, deepened through the fourth quarter, with impacts felt across additional banners in the West and which have led the Company to incur an impairment charge of $1.3 billion dollars in addition to the charge recorded in the third quarter,” said Marc Poulin, President and CEO, Empire Company Limited, in a recent press release.

Other highlights from the Q4 report, when compared to the same quarter from 2015, are as follows:

Empire cited its recent integration of Safeway’s Canadian operations as the main factor behind the loss, although the Q4 report also listed that Sobeys’ same-store sales also decreased by 1.8 percent. Empire stated that if not for fuel sales and the chain’s West business retail unit  having a negative impact on the numbers, same-store sales would’ve increased by 0.2 percent. 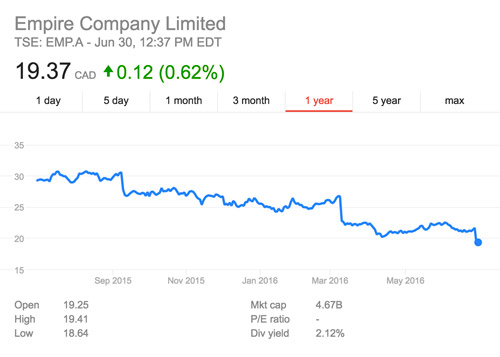 “Management is also seeing early evidence of a softening sales trend in other regions of the country. Although management remains focused on reversing these negative trends by continuing on our core strategies of cost reduction, network renewal, and relevant pricing for our customers, the stabilization of our business will take time,” finished Poulin.

The company’s Board of Directors also announced an increase of 2.5 percent to the annual dividend per share to be paid quarterly, from $0.40 per share to $0.41 per share.

As retailers across the board merge chains and shift strategies, Deli Market News will keep you updated on the latest in the industry.