With five new Florida locations added to this chain, the company strategically hones in on this influential demographic

With strategic conversions and expansions underway for its umbrella of banners, Southeastern Grocers is looking to tap in on the growing influence of the Hispanic demographic. The company simultaneously unviled five new Fresco y Más stores this morning in response to strong consumer demand.

Customers of Fresco y Más now have access to a renovated bakery department, with Hispanic pasteries and baked goods, and a new full-service Latin butcher shop (or, carnicería). The following expansions and features are also a part of the banner:

The Fresco y Más stores will also focus on delivering lower, everyday pricing for its customers, with specialized promotions on items with high demand. The banner also emphasizes Hispanic selections, and offers an expanded offering of these items to allow the demographic greater access to authentic, quality food for less. 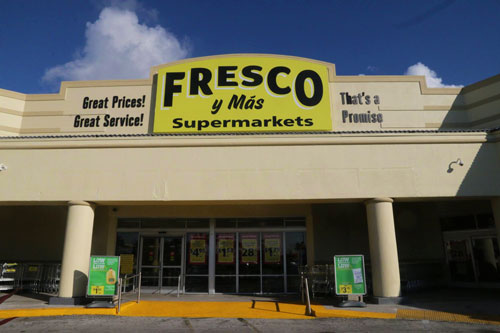 “We have been listening to our Fresco y Más customers in Hialeah and have tailored additional stores to reflect our customer’s personality, while providing great value, great prices, and great service,” continued McLeod.

Peppered throughout the Miami-Dade and Palm Beach County areas, the five new stores join the chain’s initial pilot location in South Florida. Southeastern Grocers stated in a press release that the five stores were converted to further the Fresco y Más brand after its initial store marked great success. The first Fresco y Más opened in June earlier this year.

The company stated that across the six stores now part of the chain, 300 jobs have been created for the South Florida community. The stores were all opened with a simultaneous ribbon-cutting at 10 a.m. local time.

As we previously reported, other notable buy-side banners within the industry are also placing more emphasis on the Hispanic demographic and its subsequent opportunities. Retailers such as Walmart, H-E-B, Kroger, Albertsons, Fiesta Mart, and El Rancho Supermercado are also focusing on the possibilities focusing on the demographic presents to the buy-side sector.

This expansion is the latest in a string of strategies handed down by Southeastern Grocers. The company also recently converted 73 of its stores to the Harvey banner, and released a new store format for Winn-Dixie. All these decisions, the company has stated, were based on consumer demand and feedback.