Which executive officer has resigned their post after one year with the retailer, and who will take up the torch?

It looks as though there is some more changeups in the retail leadership scheme, the most recent being the executive side of the financial helm for SpartanNash Company.

The retailer’s Executive Vice President and Chief Financial Officer, Christopher Meyers, has resigned from his post for personal reasons, according to an SEC Filing dated June 27th. Effective July 14, Board of Directors-selected interim Thomas Van Hall, the retailer’s retired VP of Finance, will step into the position until, presumably, a more permanent replacement is named.

Myers previously served as CFO of KeHE Distributors, where he was credited for orchestrating two multi-million dollar acquisitions for the company, according to an MLive report. He marked his first anniversary with SpartanNash in April of this year.

Van Hall brings a long tenure with the retailer, working as Vice President Finance from 2001 until July of 2015, leading the integration management for the merger of Spartan Stores and Nash Finch Company from August of 2013 to July of 2015.

The company stated that during his service he oversaw the operations of the finance department, including retail, distribution, and corporate accounting, and is familiar with duties such as: 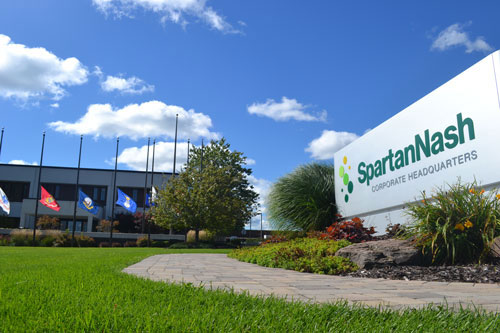 SpartanNash did not disclose further information on a permanent replacement, and at the time of this report had not released a comment on the changes. Deli Market News will deliver any updates as they are made.