Upward movement looks to be in the works for Walmart, especially for investors in the company. Walmart reported big dollar earnings in its 2017 Q1 after successes in e-commerce acquisitions and investments. This led to Walmart’s stock hitting a 52-week high, with Reuters noting an 8.7 percent increase to $77.40.

“We delivered a solid first quarter and we're encouraged by the start to the year,” Doug McMillon, President and CEO. “We’re moving faster to combine our digital and physical assets to make shopping simple and easy for customers. Our plan is gaining traction, and I want to thank our associates for their hard work ingenuity and commitment to our customers. Our customers have choices and we have to earn their business with every interaction.”

Walmart has been putting a pointed focus on e-commerce with acquisitions over recent months with companies like Jet.com, Moosejaw, Shoebuy, ModCloth, and possibly Bonobos in the near future. The company’s Q4 report tagged its e-commerce growth at Walmart U.S. at a 63% sales increase, with the majority of that push coming organically through Walmart.com. 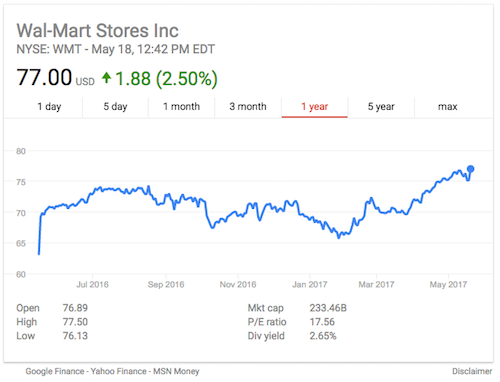 Other highlights from Walmart’s report include:

Walmart had previously invested $2.7 billion to increase wages and the amount of training entry-level employees receive. This was another contributing factor for the sales boost, as the company reported that its store visits rose 1.5%, the tenth consecutive quarterly increase.

As Walmart continues investments into e-commerce and its employees, Deli Market News will continue to report.