Richard L. Knowlton of Hormel Foods Has Passed Away

Current Chairman, President, and CEO Jim Snee reflects on the legacy of this longtime company leader

Richard L. Knowlton, known to those close to him as Dick Knowlton, has passed away. The longtime leader and former Chairman, President, and CEO of Hormel Foods is survived by his wife Nancy and their five children: Scott, Kim, Claudia, David, and Julie.

“Dick was one of the most beloved and visionary leaders in Hormel Foods' 128-year history,” commented Jim Snee, the company’s current Chairman of the Board, President, and Chief Executive Officer, in a statement on Hormel’s website. “His legacy of ingenuity and excellence has left a monumental and enduring impact on our great company. He was an admired and compassionate leader, both at Hormel Foods and in the community.”

Born on June 9, 1932, in Austin, Minnesota, Knowlton was raised in the same town where Hormel Foods is still based today. After graduating from the University of Colorado with a Bachelor of Arts degree in 1954, Knowlton began working at Hormel full time in 1954 as Merchandising Manager in Fremont, Nebraska. During this same time, Knowlton served as a U.S. Air Force Intelligence Officer.

Over time, Knowlton rose up the ranks at Hormel, eventually being named President and Chief Operations Officer in 1979, then Chief Executive Officer and Chairman of the Board in 1981. Under Knowlton’s leadership, Hormel noted that the company was able to broaden its offerings and moved from a commodities-based meat processor to a highly diversified multinational consumer foods company known for its innovation and value-added products for the changing consumer lifestyles at the time. The company highlighted Knowlton’s willingness to create an environment that encouraged entrepreneurial risk-taking, which then led to the introduction of many pioneering products including shelf-stable, microwaveable foods for adults and children; an extensive line of 97 percent fat-free products; and fresh, health-oriented foods uniquely packaged for convenience and quick preparation. He retired from the role of Chief Executive Officer in 1993 and Chairman in 1995. 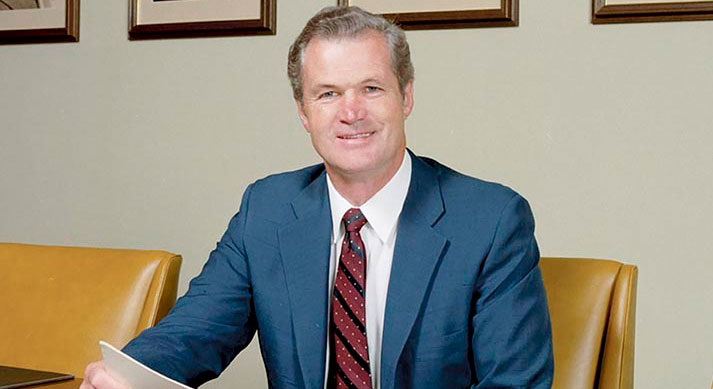 In addition to his advances to Hormel Foods’ business culture, Knowlton also served as Chairman of the Board of The Hormel Foundation from 1995 to 2009, distributing more than $87 million for projects to benefit the Austin community. Knowlton was inducted into the Minnesota Business Hall of Fame in 2010 and has received many awards for his leadership, including Carnegie-Mellon’s Outstanding Crisis Manager of the Year in 1987, the Anti-Defamation League’s Man of Achievement Award in 1990, and the Industry Advancement Award by the American Meat Institute in 1993. He was inducted into the Meat Industry Hall of Fame in 2009.

“Dick and Nancy have had an unwavering commitment to his hometown of Austin, Minnesota, and countless other communities, organizations, and universities,” Snee continued in his statement. “They have been more than just philanthropists, they have been humanitarians in the truest sense. Their commitment to giving back set an example that continues today in the work Hormel Foods does locally and globally. We will remember him as a great leader, ambassador, and gentleman.”

Deli Market News would like to offer our condolences to Knowlton’s family and friends, as well as the team at Hormel Foods.