After surviving the Tank, John Sorial shares what's to come from a partnership with KIND's Daniel Lubetzky

One of my passions in life is food, and I’m not alone; that passion is one of the main building blocks on which John Sorial founded TaDah Foods. However, the Queens native set out to not only improve peoples’ perception on food, but the world we live in, one falafel at a time. 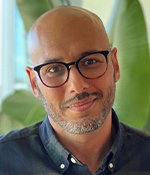 “I’ve always seen the importance that food plays,” John tells me. “The ability to connect with people through food is a passion of mine. Another is wanting to make a more positive impact in my local community and the global community abroad.”

John started his business back in 2010, intent on making minimally-processed, flavorful, high-quality East Mediterranean products. The very first product the company was founded upon actually came about by accident. Or was it a fateful occurrence? 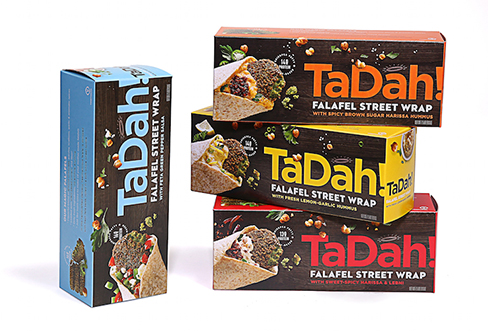 “I was working, and I had some falafel I made previously in the freezer. So, I whipped up a fresh batch of hummus, but I didn’t have any pita bread. What kind of Mediterranean person am I?” John shares with a chuckle. “But I did have tortillas, so I threw them in there, rolled it up, and made this falafel burrito, if you will. I was eating it one-handed, typing with the other, and thought, ‘This is really, really good.’ The tortilla worked perfectly.”

It seems that TaDah Foods was founded on both passions and opportune moments. The company’s name was inspired by John’s son when he first bit into a lemon, initially recoiling at the sour shock, but embracing the sharp tang on his second bite. As his son’s eyes widened in enjoyment, the brand soon formulated in John’s mind.

“What happens to people as we get older, we become jaded. We become closed off to new flavors and foods,” John explains. “I wanted the brand, the food that we were making, to offer those same types of moments that my son had. So, the concept for TaDah crystalized: a delightful surprise that would make you happy in unexpected ways. We’re delighting consumers, we’re giving them new flavors and new experiences. For some people, they’re having East Mediterranean food for the first time.” 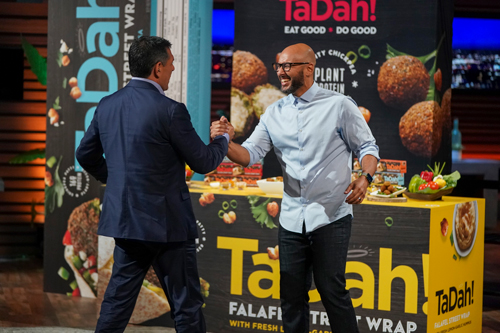 So, what’s in store now that John is backed by KIND’s Founder and Executive Chairman Daniel Lubetzky, who pledged to invest $500,000 for a 25 percent stake in TaDah Foods on the season 11 premiere of “Shark Tank?”

“Definitely ideating and bringing new products in the market is key for us in the near and long term,” John starts off. “We’re working on getting our product to more and more stores because the demand and response post-‘Shark Tank’ was off the charts. People know we exist and what we stand for, and we have Daniel Lubetzky from KIND not just backing us, but partnering to take this broad and wide.”

The relationship between John and Lubetzky wasn’t only founded on the principle of wholesome food from real ingredients; both entrepreneurs came from migrant parents and share a personal and deep commitment to giving back and making the Earth a better place. TaDah Foods contributes 25 percent of profits toward non-profit organizations for social change like the Meant 2 Live Foundation. 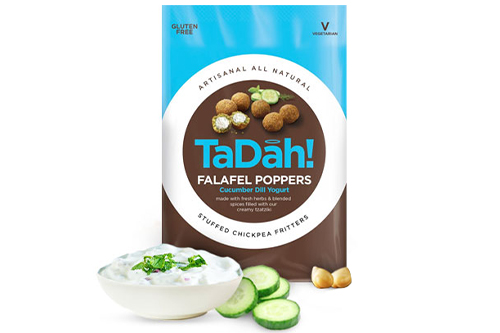 “What really connected me to all of the sharks, especially Daniel Lubetzky and Marc Cuban, but ultimately Daniel, was not just the quality of our plant-based foods, but also the passion behind it,” John continues. “It was what kept me pushing forward and driving me through a lot of difficult times. I knew that ultimately the success of TaDah was going to make a tremendous impact on the children's lives. I wasn’t expecting to be that vulnerable, but I’m from Queens; if it’s fight or flight, I always choose fight. And I was fighting for not just my dreams for the company, but what I want to ultimately do with the success of our plant-based line. That’s what made me fight that much harder when I was in the Tank.”

TaDah Food’s’ Falafel Wraps are packaged and can be found in the freezer section, but have been widely acclaimed as tasting as though they’re fresh and straight from the kitchen. They are available in Fresh Lemon-Garlic Hummus, Feta Green Pepper Salsa, Sweet-Spicy Harissa & Lebni, and Spicy Brown Sugar Harissa Hummus. The Falafel Poppers, an original concept with gluten-free in mind and a creamy dip in the center, comes in Cucumber Dill Yogurt, Lemon Roasted-Garlic Hummus, and Harissa Hummus. To get your hands on these savory products, click here to find locations or become part of the growing list of retailers. For more inspirational innovations, keep reading Deli Market News.

Create super inventive, high-quality, East Mediterranean cuisine that inspires passion and wonderment in every bite in order to help fund non-profit organizations that we are passionate about. Eat...