"The board of directors of the company unanimously rejected the indication of interest and determined that it provided no basis for further discussion between Mondelez and the company," Hershey said in a statement.

Mondelez initially made the bid to bring Hershey’s solidified foothold in the U.S. market to its global expanse. According to Reuters, this merger would have surpassed Mars Inc, which holds 13.3 percent of the global market, as reported by data collected by firm Euromonitor International Ltd. This merger would have combined the second largest candy company, Hershey’s, with the fifth-biggest candy maker, Mondelez, to make the largest candy corporation in the world. 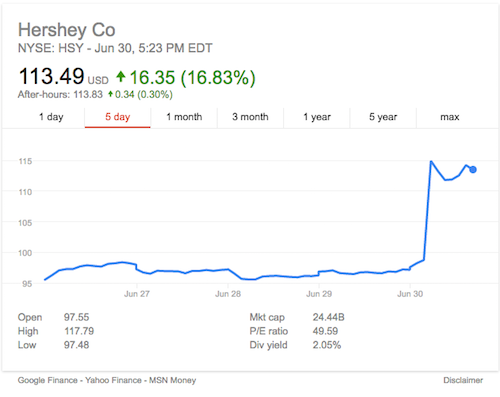 According to The Wall Street Journal, Mondelez, maker of Oreos and Cadbury bars, sent a letter to Hershey’s with a bid for $107 a share; with 50 percent of the bid being cash, and 50 percent stock.

People close to the matter, as reported by Wall Street Journal, said that Mondelez also looked to sweeten the deal by pledging to protect Hershey jobs following a merger and even rename itself to Hershey.

Reuters and other sources said that the biggest hurdle in Mondelez’s strategic way is not the Hershey Company, but its majority shareholder- the Hershey Trust. The wealthy charity currently posseses around 81 percent Hershey’s voting rights, and has prevented previous acquisitions. 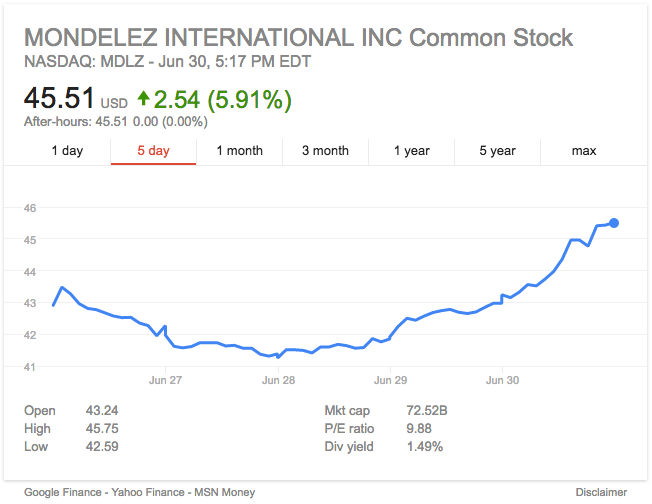 Despite the snub by Hershey, stocks for both companies rose immediately after the bid’s initial announcement. Hershey’s stocks jumped up 15 percent to $111.8 per share, according to Reuters, with Mondelez rising 2.3 percent to $43.97.

Mondelez has not yet responded to Hershey’s rejection of its initial bid, at the time of this article's writing.

Keep your sweet tooth hovered over Deli Market News as we keep a close finger to this prospective buyout, and other merger shakeups within the industry.