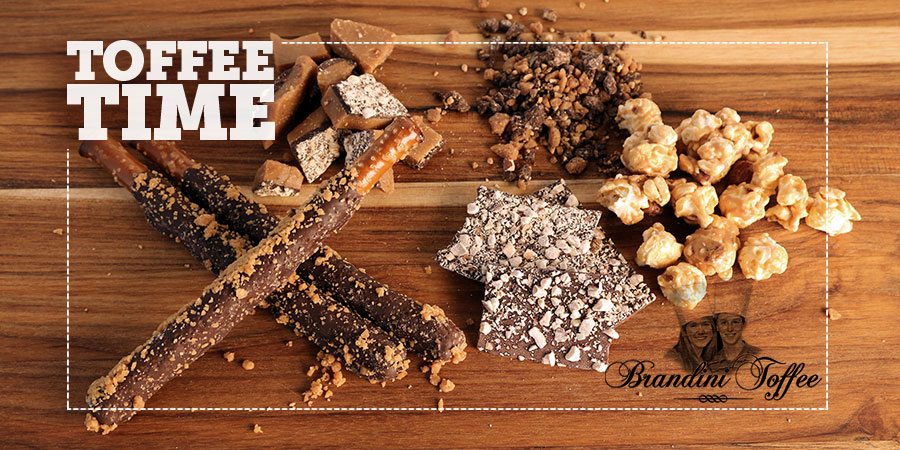 This young and enterprising company isn't slowing down anytime soon 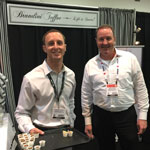 I met Brandon Weimer at the Fancy Food show this year in San Francisco. I was immediately struck by his outgoingness, friendly demeanor, upbeat attitude and infectious energy. Brandon was with his father, Brad Weimer, a man who shared his son's enthusiasm, and whom together, stood out as being an unimpeachably authentic business duo. So today, I'd like to introduce you to (well for those that don't already know) Brandon Weimer, co-founder and current owner of Brandini Toffee.

The day I met Brandon, he asked me if I'd like a sample of toffee. Of course, being a lover of toffee myself, I caved, and happily accepted a small sample and then later a shiny cellophane bag of toffee tied with a simple black ribbon and added it to my bag with a few other samples I gathered that day. I tried more of the toffee later that evening. The flavor, texture, and bite was impressive if not amazing. In fact, probably the best toffee I've ever had. If Brandini Toffee isn't around for a hundred more years, it won't be because Brandon isn't a likeable person, and it certainly won't be because his toffee doesn't meet the standard.

Then a week ago (now over a month), while working, I was interrupted by a tweet with a photo of Brandon sitting on top of some new equipment for their new factory space, a popcorn blower and a chocolate melter. Popcorn? Naturally, I was intrigued and called him up to learn more about what was happening with his new facility and also his company in general.

"Adapting, to sum it up in one word. Things change, and your job changes, and others' jobs changes, and you kind of have to be the leader to make sure that you're ahead of the curve."

From the phone call, I learned that Brandini Toffee does only one show a year: The Fancy Food Show in San Francisco. Although they've walked the New York show, they're still limited in their capacity to produce enough volume to supply the entire country as of yet, but that's why their new factory space is so important for their growth. Right now, their impact is somewhat regional, but you can most likely find a store in your state that sells Brandini Toffee, in addition, you can order it online. 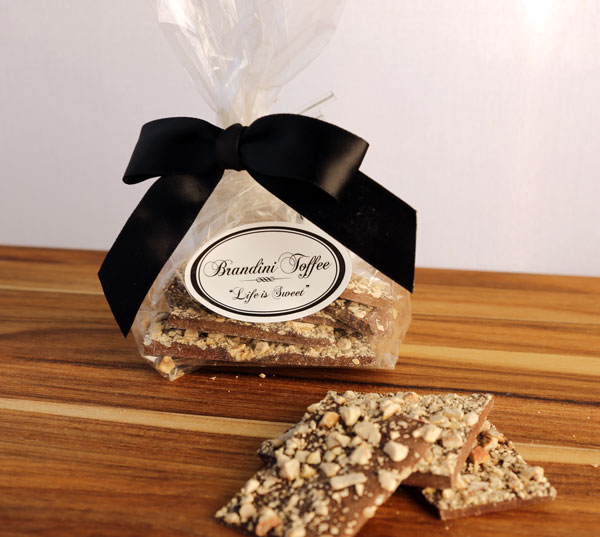 As Brandon explained to me, they are still a small business, a designation that comes with its own set of unique challenges. He states, "There'a a lack of structure... as there naturally is with small business. We're a growing company, which is the good news, but then also a changing company as well. You're adapting, wearing many hats. No two days are the same and as we adapt, we are trying to create a structure that the company can keep up with and the company can grow into." Brandon continues, "and then, trying to foster new ideas that everyone within the company is on board with and in support of. Adapting, to sum it up in one word. Things change, and your job changes, and others' jobs changes, and you kind of have to be the leader to make sure that you're ahead of the curve."

The new sign is up! Only a couples of weeks until we open our new toffee factory in Rancho Mirage. #BrandiniToffee pic.twitter.com/V71ffHUywg

To stay ahead of the curve, Brandini is expanding to a new larger facility. Their current facility, a 5,000 square foot space which was once a Coco's restaurant was purchased for redevelopment 2 years ago, which Brandon explains was necessary and a good move for the city as well. They've been making toffee in their current location since they started, but now they're moving on to bigger and better things. "We're within a shopping center in Rancho Mirage, a very central location in our valley and an upscale town. Now we're moving into a building that is much larger than this one. I can't say it's a new building, it's about 40 years old, but we've completely renovated the inside, our landlord, renovated the outside, it's impressive. It's a big facility, it's ideal for our production. We're so excited. It opens the doors to our capacity and we are bringing in more exquipment to help with that process."

"We did some R&D on it, and we said, 'Wow, this is outstanding.' It doesn't take any additional ingredients, other than popcorn, so we started creating this product."

He continued to explain to me, that as a company, they are looking at the needed essentials so that they can meet the demand of Q4 in 2016, the peak season, which includes the new popcorn air-popper and the chocolate melter.

Refrigerator and hood is being installed today at the new toffee factory... We can't wait to show u! #BrandiniToffee pic.twitter.com/sTgXUypE15

As mentioned earlier, I didn't know that they even made popcorn, so that was the next topic. To my surprise, he told me that they've already been making the popcorn for 4 or 5 years, a detail I failed to recognize at the Fancy Food show. The idea was given to them as a suggestion from a customer at a street fair. "We had a customer come in, actually a street fair, and recommend that we enrobe some popcorn with our toffee. We did some R&D on it, and we said, 'Wow, this is outstanding.' It doesn't take any additional ingredients, other than popcorn, so we started creating this product. We came out with one flavor, which is Chocolate Almond, and then a little while ago, we came out with Cashew Almond, which is actually preferred between the two...and easier to distribute without chocolate." 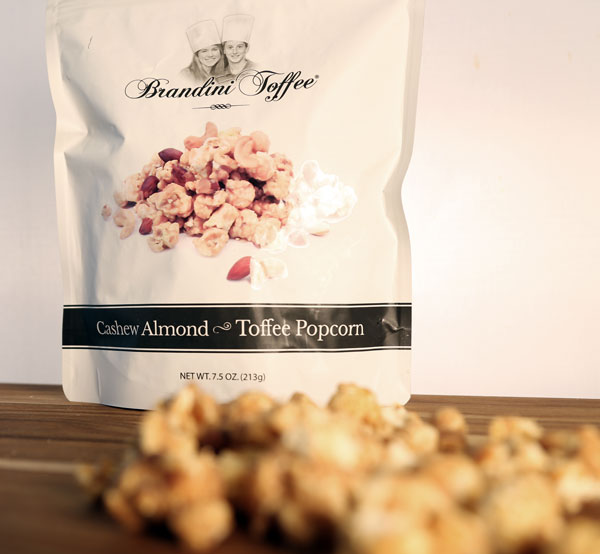 He says, their new "huge" 14oz. bag of popcorn has more of a mass appeal and is priced at $15, which he admits is quite the investment for someone new to their product. He went on saying, that initially, their $15 bags of popcorn were met with resistance, at least to those unfamiliar to their product and brand. In response they created a 7.5oz. bag which he says has helped immensely with distribution and customer need. 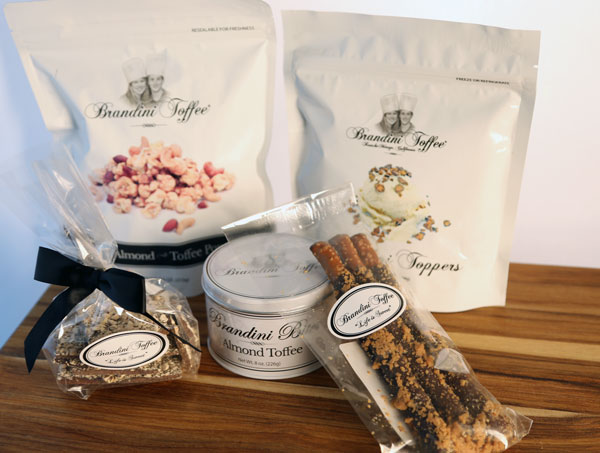 He sums up about the popcorn with, "Apples to apples, popcorn is definitely less seasonal and really gaining traction on the wholesale end. Our next goal is to come out with a 2 or 3oz. version that can be used for more impulse purchases. That's the goal, not more products - more SKUs, that might appeal to more retailers."

I mentioned that I noticed on their store map that the Brandini is sold at 2 Costcos in his area and asked him if their toffee and popcorn was on its way to more locations. "A lot of people in our area knows we're in Costco....we've been there for 7 years. Last Fall, we sent out a shipment to 15 warehouses...and the goal this year is 25 warehouses, which is plenty for us right now. Time will tell, but we're all really confident that there's room to grow with them."

-Updated: Scanning their Twitter account for images it seems as though things are still going quite well for Brandini and Costco. See below:

To learn more about Brandini Toffee, checkout their website. Brandon was also kind enough to send us some samples to photograph and eat, and we're grateful. Thank you, Brandini Toffee! Also, check out their social media on Twitter and Instagram for updates which are managed by Brandon's father, who does a great job documenting their ongoing story.

We'll also be in touch with Brandini Toffee, so stay in the loop with DeliMarket News, your sweet spot for dairy, bakery, deli and specialty food news.

Another for the trophy case... Thanks CalTravel for the recognition today! #BrandiniToffee #MadeinUSA #California pic.twitter.com/FRNoMMDKoX