From its inception to its latest line, Cody Miles discusses the protein brand from Under Armour founder Ryan Wood

While we tend to place more emphasis on celebrations boasting big numbers—50, 75, 100—I think there is something to be said about jumping from single digits to doubles. Despite being low, or young depending on how you look at it, to me reaching that ten-year mark is a pivotal stepping stone to a bright road ahead, which I think is still an understatement when describing Sweetwood Smokehouse.

What started as a passion project for Ryan Wood, Owner of Sweetwood Smokehouse and Co-Founder of performance apparel brand Under Armour, has since transformed into a leading meat snack provider whose finger isn’t on the pulse, but is the pulse—sort of like an orchestra conductor’s baton—for the meat category at large. In honor of Sweetwood Smokehouse’s tenth anniversary, I caught up with Cody Miles, Sales and Operations Coordinator, to find out more about how the company is celebrating this major milestone. 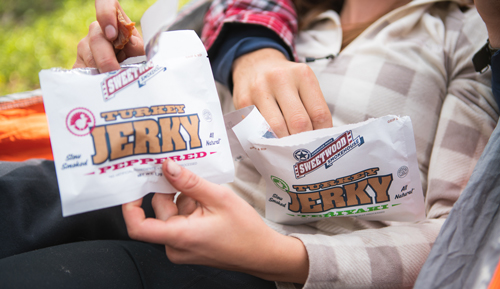 Which he wouldn’t disclose any details about! Pre-teen rebellion at its finest! Cody did, however, point to Sweetwood Smokehouse’s latest product launch—a new line of Turkey Fatty hickory smoked meat stick snacks that is already setting a precedent in the world of protein innovations.

“We just launched our new line of Turkey Fatty’s, which is an extension of our Beef Fatty line, and response has been good,” Cody said. “Sometimes turkey products are dry and sawdust-like, but we made an effort to keep our Turkey Fatty’s juicy. As a result, we’ve received a lot of great feedback from specialty grocers and collegiate sports teams saying they’re delicious, capture great flavors, and are only 50 calories and with no trace sugars. The Turkey Fatty is quickly becoming a great alternative for people trying to stay away from red meat.” 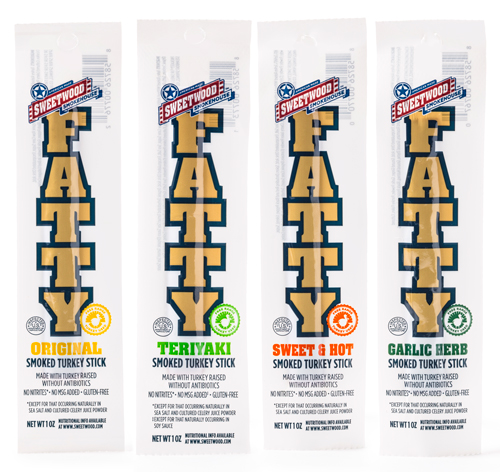 The Turkey Fatty line is currently available in four flavors: Original, Teriyaki, Sweet and Hot, and Garlic Herb. And, like many of Sweetwood Smokehouse’s products, the line contains no nitrites, added MSG, or GMOs and is gluten-free. Not to mention each Turkey Fatty comes in a 1-ounce package, making it a great grab-and-go snack for consumers.

In terms of packaging, Cody explained that Sweetwood Smokehouse’s logo used to feature an O24 reference, which Ryan Wood used as his original brand on all Sweetwood’s Cattle. Now, however, the logo has been simplified to feature a bold blue star to represents the company's different points of protein like beef, pork, and turkey, and allude to Sweetwood Smokehouse’s future products to come. The star is also red, white, and blue to symbolize the call to action of Made in America.

“We continue to draw inspiration from our headquarters in Steamboat Springs—big mountains, cold rivers, and fresh air go into everything we do,” Cody shared with me. “Our team of passionate carnivores is constantly developing new products and packages that are good for consumers and the environment.”

For more ways to go get your meat on, stick with us at Deli Market News.

Born and raised in Colorado’s Rocky Mountains, owner Ryan Wood, returned to his roots in Steamboat Springs after co-founding the performance apparel giant Under Armour in Baltimore, MD. Sweetwood...