Stepping into this burgeoning category, the snack maker unveils a new arsenal of products to rake in sales

The Keto way of eating is taking the world by storm, and Cibo Vita knows it. The company has announced that it will be expanding its popular Nature’s Garden Keto line with the launch of its new Probiotic Keto Variety Snack Packs. The new offering features a two-in-one format, which includes the traditional savory Keto Snack Mix along with a newly created Choconut Keto Mix for a sweet counterpart.

Nature’s Garden’s new mix features Probiotic HOWARU® Shape, a unique formula of 10 billion Bifidobacterium lactis B420™, a naturally occurring strain of probiotic, according to a press release. The mix also incorporates pecans and macadamias to create the highest amount of fat to carb ratio. Additionally, nutrient-dense almonds, pepitas, and cheese are added, which raises the saturated/unsaturated fat ratio, and adds high protein. 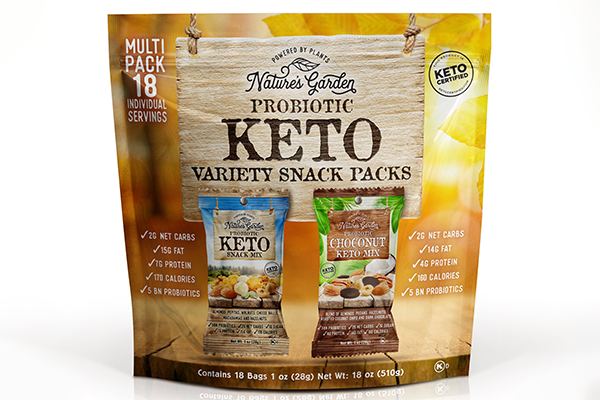 Other naturally sourced ingredients and nutritional information for the new mix include:

The mix comes with 18 one-ounce bags in each package for the variety pack, and it will join the traditional 18-ounce bags of traditional Keto Mix at featured club stores. The variety pack hit shelves in August and is also available on the Nature's Garden website as well as on Amazon.

As the keto revolution continues, Nature’s Garden has a leg up on the competition as it continues to expand its unique range of snack foods. For more updates on what the company has in store as well as other new snacks hitting the market, keep reading Deli Market News for the latest.

For today’s health-conscious, mindful snackers, Nature’s Garden offers bountiful “Smart Snacks” that span generations, tastes and health goals, enabling you to do more in life. All backed by our...