Wielding this proprietary innovation, the plant-based purveyor sets out to expand its consumer base nationwide

As a California native, I have been privy to the delicious flavors of Nowadays plant-based chicken nuggets for a while now. I am happy to say that the rest of the United States will get to indulge in the crispy, juicy, craveable products now too, as the company has revealed it will be taking its nuggets nationwide for the first time. 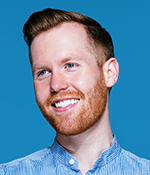 "Plant-based meat has huge potential to improve human and planetary health. Yet, when you look at the ingredients and nutritional profiles for many of these products, similar to their conventional meat counterparts, there's a lot of room for improvement," said Co-Founder and Chief Executive Officer Max Elder. "At Nowadays, we don't think food has to damage your body or the planet in order to be delicious. That's why we're creating healthier, simple ingredient meat alternatives that don't compromise on taste or texture. We believe this combination is critical to accelerating widespread adoption of plant-based meats and making our food system healthier AND more sustainable."

Nowadays crafts its nuggets using a proprietary technology that creates a texture and flavor that closely mimics real chicken. However, according to a release, the company only uses seven sustainably sourced and recognizable ingredients, including yellow pea protein grown by U.S. farmers, whole wheat flour, organic cold-pressed sunflower oil, plant-based fiber, and mushroom and yeast extracts. 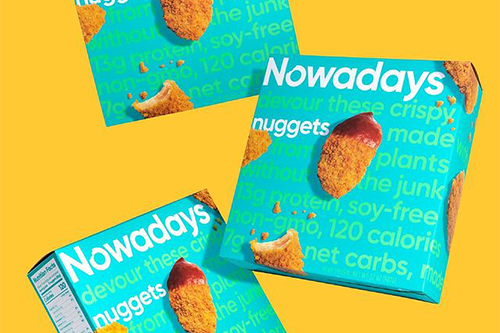 Nowadays uses no binders, thickeners, or artificial ingredients, and its nuggets are GMO- and soy-free as well as 100 percent plant-based. And as more consumers opt for healthier, whole-cut, plant-based meat options, these tasty nuggets will satisfy their needs.

The plant-based chicken nuggets are also a great option for busy parents needing to give their children a healthy snack, or just people on-the-go, as they can be baked and ready in about 15 minutes. To inspire even more eating possibilities, Nowadays has a variety of recipes on its website ranging from a “chicken” Caesar salad wrap to Korean-style sweet & sour “wings.”

A Public Benefit Corporation (PBC), Nowadays was founded by Elder and Dominik Grabiniski as they saw a gap in the plant-based meat market where they could launch products that would be less-processed and better for the planet while satisfying consumer cravings. 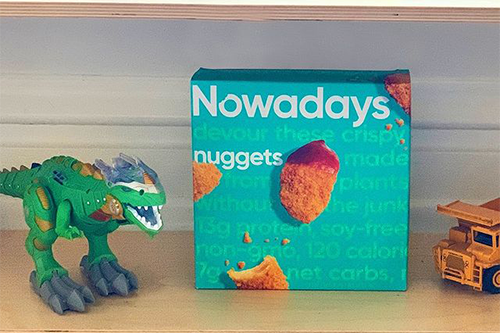 The pair pulled together their more than three and half decades of expertise in the food and ingredients industry— Grabinski as an agricultural engineer at major ingredient companies including Cargill and DSM, and Elder as a food innovation thought leader and recognized plant-based food advocate who has advised groups like Nestlé, General Mills, and the Bill & Melinda Gates Foundation Nutrition Program—to launch Nowadays.

With the company already expanding its reach nationwide, when will Nowadays make its foray into retail locations? I, for one, will be waiting with bated breath to find out.

Junk-free junk food so you can indulge better.