Leave it to Trader Joe's to not just stay on top of a fast-growing trend but build upon it with its own innovation. According to a report by VegNews, the beloved grocer is sending plant-based meat lovers like myself into a tizzy by bringing yet another meatless option to the market—and one that strays from the mainstream, at that: Turkeyless Plant-Based Meat Patties.

“It may seem far outside the ordinary, implausible, even, but plant-based burgers have become one of the most popular food trends of the past few years, and there’s no sign of slowing down,” Trader Joe’s said in a statement. “Folks are increasingly going for meatless burgers for all kinds of reasons, but we like to think that one reason in particular is primarily responsible: plant-based burgers have gotten really, really good recently.” 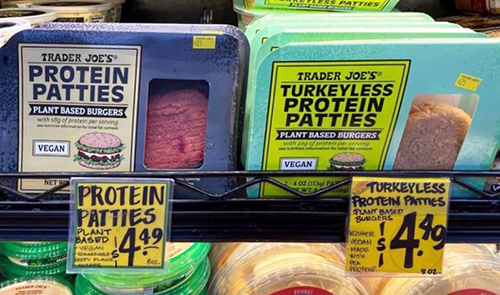 What's particularly interesting about Trader Joe’s latest launch is that it doesn't follow the typical beefless beef patty format that has become the norm in the plant-based sector. Instead, the new Turkeyless Protein Patties mimic a lean-and-mean turkey burger and boast 23 grams of protein per serving.

Trader Joe's new product also follows its beefless launch from earlier in the year, which was met with extremely high praises from the chain’s cult-like following.

What will Trader Joe’s debut next in the plant-based sector? Deli Market News and its team of plant-based enthusiasts will keep you up-to-date.