Calling all carnivores! For those of you about to riot over the plant-based movement, Arby’s salutes you. Plant-based seems to be the buzzword on everybody’s lips, but what about the dedicated meat-eater? What’s a tried-and-true carnivore to do in a world filled with veggies? For Arby’s, the answer is an incognito carrot, the world’s first Megetable, or meat-based vegetable.

While many fast food companies are jumping on board with plant-based menu items, Arby’s is one company that refuses to stray from its meat-based philosophy. As a result, it came up with a new gimmick—the Marrot, which stands for meat carrot, though I will be co-opting the phrase to describe any massive, married, or magnanimous parrots I see. 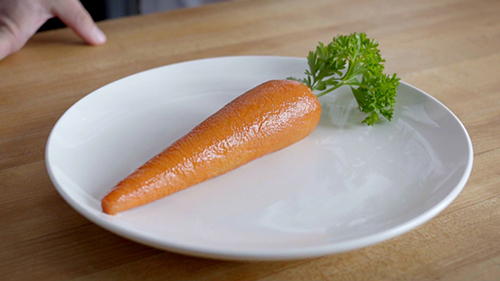 The Marrot looks just like a carrot, but in reality it is made from 100 percent Arby’s turkey breast, which is rolled in a cheesecloth to form a carrot shape, cooked sous-vide, rolled in dried carrot juice powder for coloring and nutrition, and then roasted for an hour, according to Fox News. Though not a traditional carrot, the Marrot contains 30 grams of protein and 60 percent of the recommended daily value of vitamin A, the news source reports.

Will this war between plant-based and meat-based continue to rage on? And what’s the next veggie to get meat-ified, Mucumber? Meppers? Mauliflower? Deli Market News will continue to report.

We Have The Meats™