Will Hartley Shares the Story Behind Slingshot Foods

I have always been bad at eating breakfast.

Before I know it, 11:00 am rolls around and there’s a slight moment of regret when my stomach starts grumbling and my mood is irritable because I haven’t eaten yet – otherwise commonly known as being “hangry.” This is an all too familiar situation up to a third of the country can sympathize with, and it’s an issue that Will Hartley, President of San Francisco, California-based Slingshot Foods, is looking to solve.

What Will saw was an opportunity to cater to a growing category of consumers who couldn’t find the time in the morning to make a bowl of cereal, fry an egg, or even toast bread. The solution that he found came in the form of “Slingshot,” an all-natural yogurt protein drink that comes packed with the three macronutrients consumers need to feel full and energized throughout the day – protein, carbohydrates (fiber, in particular) and healthy fat. Wrapped around each bottle is a shot of toasted oats, almond bits, and chia seeds, which consumers can pour into the drink. It was a light, portable solution that he found anyone could quickly prepare and take with them to work before they left home for the day. 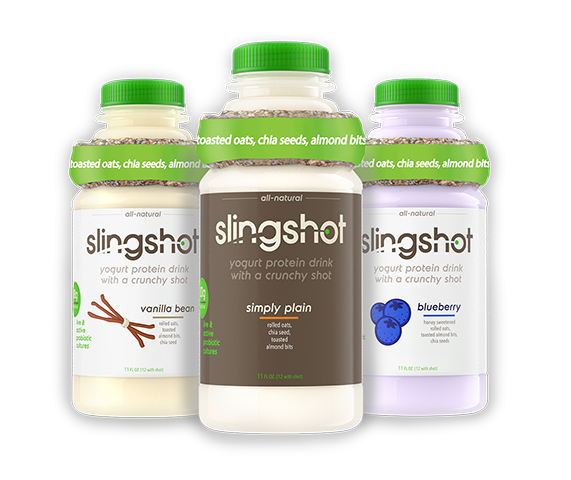 “Using ingredients that are simple and natural have always been desirable to me in the product development process – basic ingredients that you would find in a kitchen,” said Will. “The shot does the job of helping you feel full and helps regulate your blood sugar.”

Though the idea for Slingshot came around in 2005, it wasn’t until 2013 when Will started to launch the company off the ground. It was all thanks to the help of Brad Hirsch, a regional buyer at Whole Foods Market. Confident that he had a product that was unlike anything else out there, Will managed to schedule an appointment with Brad to show him his new brainchild.

“I spent five minutes pitching the idea to him and he said, ‘Yeah.’ I said, ‘What do you mean?’,” Will laughed. “He said, ‘You make that, and I will buy it.’ Sure enough, I started Slingshot a few months after that meeting. Had it not been for Brad’s encouragement, I would still be thinking about this idea as opposed to actually doing something about it.”

Will isn’t a stranger to the beverage industry. Since 1993, he has worked his way up at companies like Odwalla Juice, Innocent Drinks, and f’real Foods. He has used that experience to help build a brand that was not just unique to the dairy and yogurt industry, but would ultimately motivate consumers to not skip breakfast in the morning.

Today, Slingshot is available in more than 300 stores across California with even more retail roll-outs in the months ahead. Slingshot currently comes in six different flavors – Simply Plain, Strawberry, Vanilla Bean, Peach, Blueberry, and Powerplant – each designed to give consumers up to 20g of protein, 3g of fiber, and 600+ mg of Omega-3 fatty acids.

Stay tuned to DeliMarket News as we go more in-depth on some of these flavors in an upcoming product showcase.

It's time to face up to the facts. Morning time is kind of terrible. We're not trying to be overly harsh to the Ante Meridian (aka AM). It's just that our relationship has suffered over the years....